Nowhere Left To Run: HyTAQ Robot Is At Home In The Air And On The Ground 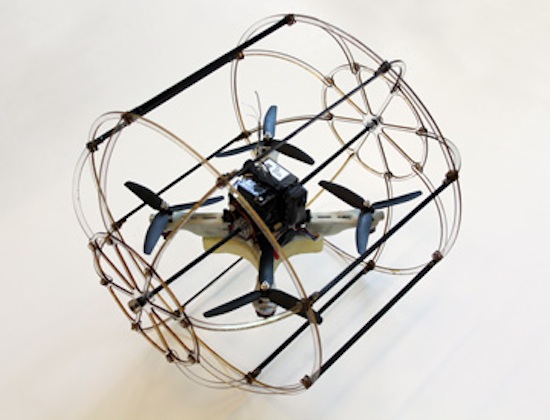 This is HyTAQ, the latest demonstration of quadcopter technology from the Illinois Institute of Technology. Unlike standard quadcopters we’ve shown you before, though, HyTAQ is a little more versatile. If weather conditions or other factors leave the copter unable to fly, it can keep chugging along courtesy of it’s convenient cage, which acts as a sort of robotic hamster ball, allowing HyTAQ to move along the ground — including rough terrain like sand dunes — as easily as it glides through the air.  The bot has been in development for sometime, but footage of it in action dropped only recently, and you’ve got to see this thing in action for yourself.

Far from a locomotion of last resort, HyTAQ’s rolling capabilities let it consume a lot less energy on the ground than it does in the air while still covering terrain. That improved battery life could keep it active in the field longer than comparable quadcopters.

HyTAQ is also resistant to pilot error or navigational hiccups, as the roll cage that protects it also acts a a  shock absorber, dampening the impact of mid-air collisions. Which means exactly what you think it means — there is simply no way to stop this thing, and it will go wherever it wants. Following us. Monitoring us. Reporting back on our actions to its shadowy masters.

We would totally start a new society underneath the water to hide from these things if we thought it would do us any good, but at this rate, it’s pretty safe to assume that the folks at IIT will have taught it to swim and demand tribute from lesser beings. So really, what’s even the point?