A Man and a Woman Switched Names at Work, and Predictable Awfulness Ensued 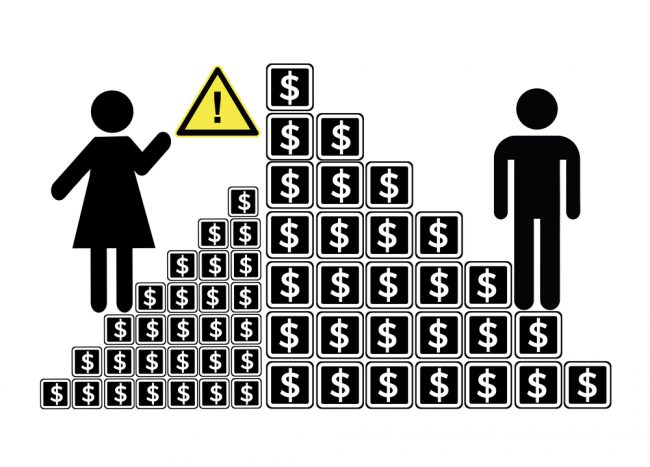 Currently making the viral rounds on Twitter is a thread by writer Martin R. Schneider. He tells the story of an experiment he and a female colleague ran: for two weeks, working from their shared inbox, they swapped sign-off names. The experience taught Schneider “how impossible it is for professional women to get the respect they deserve.” So what happened?

Schneider starts his thread by explaining that he was the supervisor of the lady worker in question, Nicole, at an employment service firm. The big boss was constantly complaining that Nicole took too long in communications with clients. After Martin realized in an email exchange that the tone changed immediately when he asserted that a male was writing, Martin and Nicole decided to switch names for two weeks. I don’t think the results will shock any woman who has worked, well, anywhere. 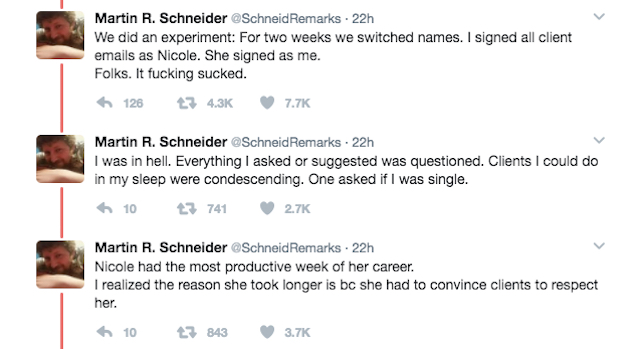 So, with no change in approach to doing their jobs except the perception of gender lent by a name, Nicole had the best week of her career, and Martin’s “fucking sucked.” He was slowed down, questioned, condescended to, and hit on. The experience was a revelation for Schneider:

And even more damning:

Yes, women are used to it, or if they’re new to a job or an industry, they get used to it fast—or fail. I have been, throughout varied positions, ignored, passed over, told to be quiet, told to watch my tone, had ideas taken from me, and watched men who I trained or who came in at much lower levels quickly rise past me in responsibility. And I consider myself lucky in having generally worked with “good guys” and not been subject to sexual harassment. (I am also incredibly lucky to be here now at The Mary Sue, the most female-empowering workspace imaginable.)

There are millions of women who can rattle off their own long discriminatory work histories without having to pause to think about it. Martin and Nicole prove that sometimes all you need is the mere perception of maleness to get ahead.

Schneider’s thread is helpful and his heart is clearly in the right place. There’s the problem, of course, that once the “experiment” was over, he got to slip back into the embrace of that invisible advantage, and Nicole had to go back to a space that “fucking sucked.” That was her every day, day in, day out. And while the thread has mostly been celebrated on Twitter for raising awareness, its popularity has seen the inevitable pushback.

It’s worth checking out Schneider’s Twitter to read the original thread in full as well as take in the variety of reactions he’s receiving. It’s been rightfully pointed out that names have cultural clout as well, and both Martin and Nicole would have faced additional discrimination if they possessed a presumed “ethnic” name. Reporters who have reached out have assumed that the two were married. “Nerdbros” have refused to believe the validity of the story because it wasn’t “scientifically controlled.”

My fav response from yesterday is nerdbros: "that's not a scientific controlled experiment!"
Yeah, no shit. We were two bored officemates.

In response to the thread’s reach, Nicole has written a Medium post called “Working While Female.” In the post, she elaborates on the environment she faced at their old workplace and the challenges of being the only woman. At one point, she asked her boss:

“Why weren’t you considering hiring any women?”
“Oh, you know. We’ve always had fun here, and I didn’t want the atmosphere to change.”

When it comes to the treatment of women in the workplace, something has definitely got to change. Tell us about your own experiences in the comments.