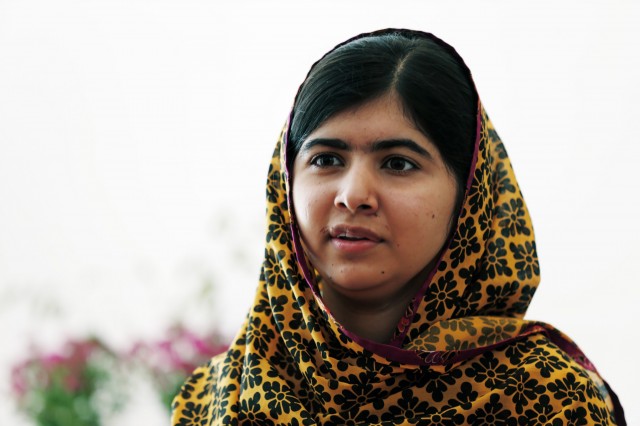 This may come as a surprise to the other people out there currently preoccupied with New York Comic Con, but the rest of the news cycle is not currently obsessing over what Marvel’s up to these days. Which is a good thing when we get news like this!

Today it was announced that Malala Yousafzai has won this year’s Nobel Peace Prize for her work in advocating for girls’ rights to education. At the age of seventeen she’s also the youngest person to ever become a Nobel Laureate, and only the second Pakistani to do so (the first, Abdus Salam, won his prize for Physics in 1979).

Yousafzai shares the prize this year with child rights activist Kailash Satyarthi, whose organization Bachpan Bachao Andolan works to eliminate child labor and trafficking in India. “It’s an honor to all my fellow Indians who have got this honor—it’s not just an honor for me, it’s an honor for all those fighting against child labor globally,” he told reporters today.

It’s also especially poignant that Yousafzai, a Muslim Pakistani woman, and Satyarthi, a Hindu Indian man, can share the prize together given the long history of conflict between the two nations.  And of course, their work isn’t done yet: as CNN notes, there are still 168 million child laborers arouns the world today, as well as 25 million children (more than half girls) between the ages of ages 5 to 16 who do not attend school.

According to the Twitter account for The Malala Fund, a non-profit set up in Yousafzai’s name to promote girls’ education, she will give a statement to the press later today after classes end at her school in Birmingham, England. That’s right, girl. Keep those grades up!

(via CNN, image via Torbjørn Kjosvold/FMS)