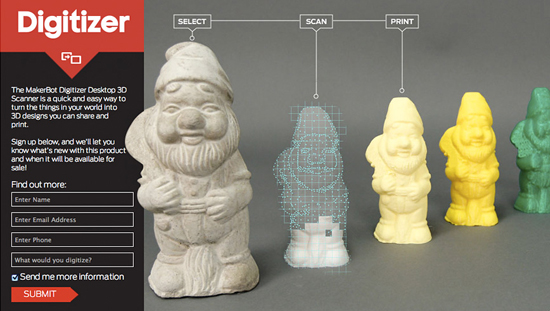 Man, 3D printing keeps getting more and more popular! The tech keeps getting better, so it makes sense that its popularity should rise as well. Soon everyone will have their very own 3D printer. You’ll be able to 3D print your friends, your pet, maybe even yourself! But until that day, let’s consider MakerBot’s new Digitizer Desktop 3D Scanner, which lets you duplicate a dirty garden gnome, or at least whatever fits inside its scanning frame.

MakerBot’s founder, Bre Pettis, unveiled the prototype at SXSW Interactive yesterday and explained the basic technology. Using lasers and cameras — what else? — the Digitizer creates a digital file out of any physical object you want, so long as it’s no larger than 8-by-8 inches. (EDIT: Probably another eight on there too, assuming it’s a cube. Thanks, bartj!) Then it prints the object using a MakerBot replicator and it does so in less than three minutes. Pettis also highlighted the real gimmick here: You don’t need any design experience or knowledge of 3D modeling. I think maybe you just need a pulse, which is great news.

To put this in terms that are easy to digest, Pettis said:

“This is kind of like what happened when Flynn (in Tron) gets digitized into the game grid. This takes us from being a 3D printer company into being a company that’s building out a 3D ecosystem.”

Like all innovative tech, the question is, what bigger things will come of this? Pettis addressed that, sort of. “Our biggest customer is NASA,” he said, “Which just makes the nerd in me so happy. They can make cheap prototypes on our machines before using their high end one.”

So until MakerBot makes larger Digitizer Desktop 3D Scanners, we’ll just need to content ourselves with objects smaller than 8-by-8. Which is fine. We can work with that. Let’s see, what’s something I already have but could sure use more of? 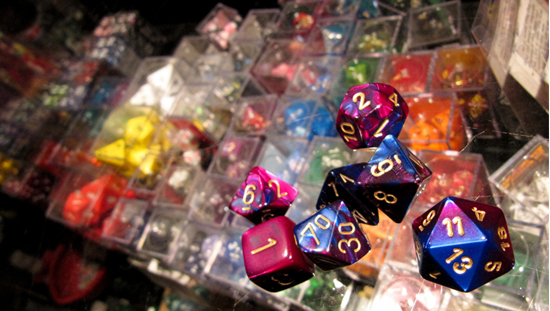 I wonder if I can engineer my DM-only d20s to display only 20s on their faces.

(MakerBot via The Verge, images courtesy of MakerBot)