Welcome to the Future: 75% of Man’s Skull Replaced by 3D-Printed Implant 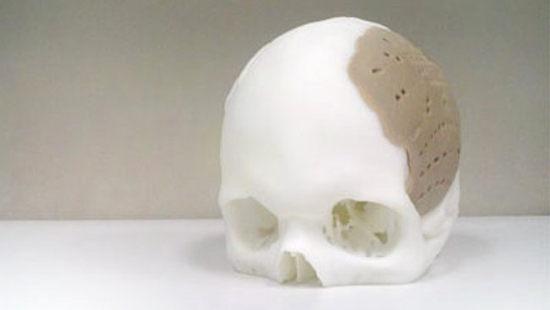 If you needed any further indication that we are living in an age of great technological advancement, now you have it. 3D printing is one of those things that’s currently being explored that has huge ramifications for the future of, well, everything. Case in point, it’s been revealed that 75% of an unnamed United States man’s skull was replaced with a 3D-printed replica in a surgical procedure earlier this week. Yeah. Let that sink in a bit.

In order to replace the skull, the man’s head was first scanned digitally to provide an accurate plan. Then the replica — which likely replaced 75% of the skull’s mass, not surface area — was made out of polyetherketoneketone, but they added special details to the surface of it in order to encourage cell and bone growth. Further details on the procedure are currently unclear, but the major bits are still impressive.

This news comes after manufacturer Oxford Performance Materials got FDA approval to start using the process last month. It’s worth noting that the above image is just an example of the kind of implant used, not the specific one that now resides within the mysterious patient. Because these kind of implants can be printed, with no real tooling, the possible medical applications are near limitless.

Assuming this actually pans out as an efficient method, it could help the thousands of people that need bits and pieces of themselves replaced for one reason or another. Also, I’m calling it now, we’re five years out from cosmetic procedures.