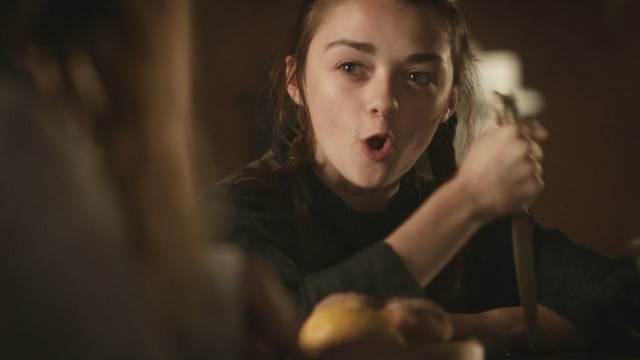 In a recent interview with The Guardian, Maisie Williams revealed that she was inspired by personal experiences to address online harassment and privacy in her upcoming Channel 4 hacker drama Cyber Bully:

I had an awful time […] It was around the time I was starting to act, and I knew exactly who it was, but it was all anonymous. Just awful things […] There were people all around me. And I was just stuck in my phone, stuck in this constant stream of what people thought of me.

Williams’ character in Cyber Bully is blackmailed by her harasser with the threat of releasing private pictures, a story partially inspired by last summer’s large-scale nude photo hack. The recent online harassment of high-profile women is symptomatic of society’s treatment of female celebrities in general, a pervasive problem that Williams believes her Game of Thrones co-star Lena Headey handles well:

It feels like society is saying, ‘Be yourself, but not like that,’[…] There’s that constant fight between being myself, and then being a toned-down version of myself – sometimes it seems being myself is ‘too much’[…] She [Lena Headey] is a fantastic actress but she doesn’t live in the limelight. I never see headlines about her. I think she’s just cracked it – I don’t want to be on the pages of Hello! magazine.

The actress also identifies as a feminist, although to quote The Guardian, “it’s not an issue high on her agenda:”

“There are creepy things that people say online that I shouldn’t have to read,” she explains, “but there are bigger things going on in other countries.” We talk about actor Emma Watson’s recent UN speech, in which she talked about her reasons for becoming a feminist, and the need for men to be onside; Williams says she is impatient with this kind of “first-world feminism”. “A lot of what Emma Watson spoke about, I just think, ‘that doesn’t bother me’. I know things aren’t perfect for women in the UK and in America, but there are women in the rest of the world who have it far worse.”

Despite being a self-identified feminist who is quick to commend other women throughout the Guardian interview and who uses her role as an actress to raise awareness about the severity of online harassment, I can’t help but feel like Williams’ Emma Watson comment will be taken out of the context of the Guardian piece as a whole: “catfights” are clicky. What could have easily been an expression of her desire for greater diversity and intersectionality will likely be manipulated by haters to condemn either Williams’ or Watson’s ideology, which is both predictable and a shame.

(Via Pajiba and Jezebel)