Recap: The Magicians’ “All That Josh” and the Toxic “Nice Guy” 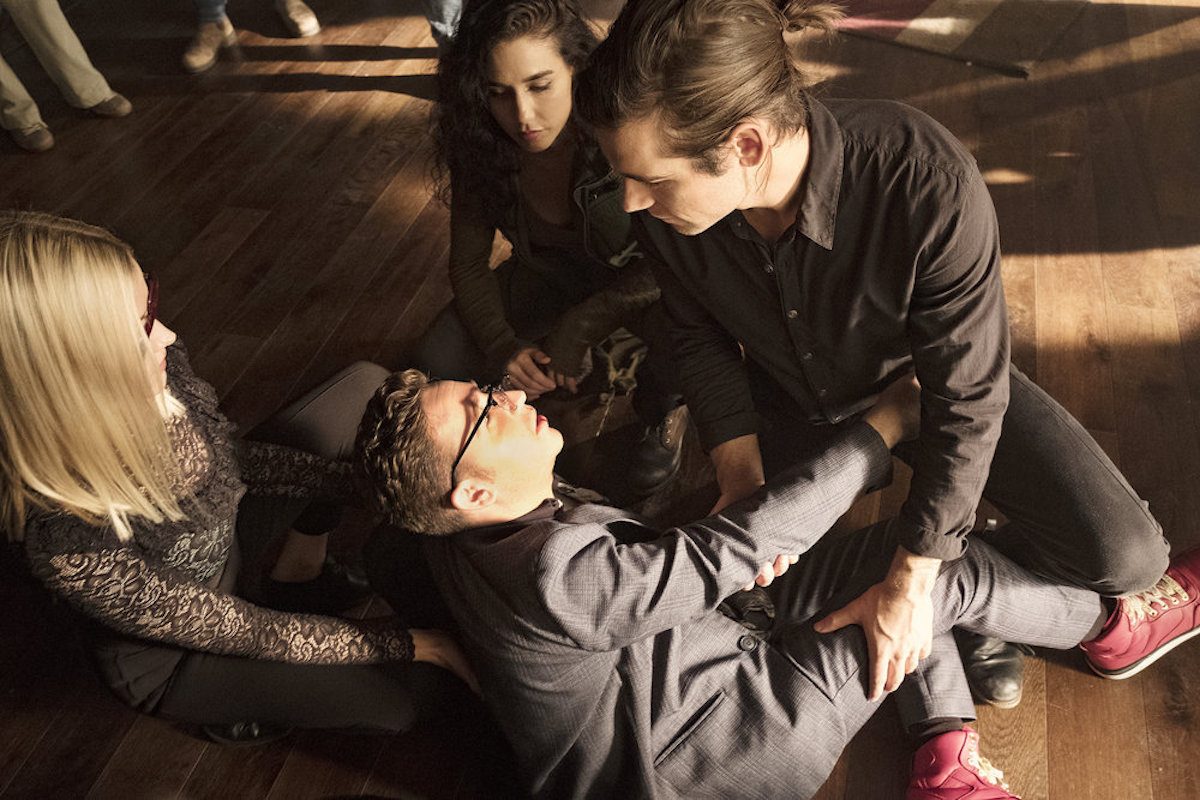 Our eight-ish became eight officially this episode with “All That Josh.” This episode had so much to live up to, and for the most part, it did. But first, how come no one told me there’s a German demon that puts you in a pocket universe of an endless party and feeds off of your joy? Of course Alice knows all about it, which is helpful when she, Kady, and Quentin fall upon what Josh is up to with the discovery of the fifth key. There are a lot of clever double-meanings with the word key here when this becomes The Musical Episode.

It seems like The Magicians may want to do a musical every season, which is more than fine by me. The one downside is then the musical loses its surprise factor. I guess, in the golden age of television, the surprise factor of an episode theme is dead, but that doesn’t mean all of magic is dead. Kady, Quentin, and Alice discover they can do party tricks when they mysteriously find Josh throwing a party at the Physical Kids house, but where’s the rest of the magic?

You can’t have everything. At least you get some David Bowie and Freddy Mercury in some form. You know that in a world where fairies are real, David and Freddy had to be real magic. Once you talk about or refer to The Goblin King (David Bowie) in a story, you have taken on a great responsibility. It’s like invoking the name of Our Lady Underground—you have to pay your proper respects. I had high hopes that the episode would do more than it did with Bowie. Maybe I just related so much to Josh missing out on The Kings’ last concert that I didn’t want to hear him talk about it. I wanted the characters to show me what was magical about Bowie—The King is dead; long live the King?

The cast did bring the song “Under Pressure” to life, at least. I realize I may just want too much; like Josh, I want the party to last forever. All About Josh was great at showing why a party can’t last forever, and why it’s horrifying when it does.

We learn that Kady (Jade Taylor) is all about music and piano, and how her mother paid for her piano lessons. Personally, I could read a whole book series about Kady Orloff-Diaz’s coming-of-age and her magical life of ups and downs with her mother. We also learn she can sing as well as Eliot, even though her solo didn’t really fit the theme of the party, but I suppose Kady’s not one to fit in. That could be what winds up saving them all, in part.

It’s Kady who leads them all to Josh and his party. This episode led me to really explore my feelings about Josh, or more accurately, his character trope. Everyone loves the Nice Guy, right—the guy who seems unassuming and harmless but is really anything but. (Pop Culture Detective nails everything insidious about Nice Guys.)

In some versions of the Nice Guy want to be a playa but can’t pull of the necessary (toxic) masculinity. (See Howard on Big Bang Theory.) He’s relatable to dudes, and even the ladies have to love him because he’s just harmless, right? (See EVERY guy on Big Bang Theory.) But all of us have to relate to him when he whines about being left out, right? (See Jonathan on Buffy The Vampire Slayer.)

Josh’s jokes about orgies and boning werewolves and fairies in past episodes grew tiresome. We get it, Josh. You the man. While other characters on The Magicians brag about sexual conquests, it’s often to express some other sentiment like emptiness, desperation, or valuing friendship more than casual sex. In the case of Margo, she often does it to reclaim her power in a situation. Sometimes Margo does brag about conquests for the same reason Josh does, to prove she’s the party girl, and yes, it annoys me when she does this, too. But Margo has proven herself over and over again.

Margo has probably proven herself more than anyone as loyal part of the group. In “All That Josh,” we get to see her loyalty, and the value she puts on consent with her friends—both human and sentient object—pay off. I want to high five Margo for this, even though my fan-girling will make her roll her eyes at me. I’m much like Tick Pickwick, Margo and Eliot’s royal advisor and fan-boy who Rizwan Manji plays with all the enthusiasm a fan-boy can muster. But in this episode, Margo and Eliot learn the other side of that enthusiasm. A hidden theme here is entitlement and all its complexities, and how it gets in the way of harmony.

Harmony and disharmony are the true themes of “All That Josh.” The Magicians shows how the “harmless” trope of the Nice Guy wants forced harmony so badly that all he brings out is chaos. Male characters we love may not always be Nice Guys 24/7, but they can often have arcs that fit this trope (See Xander on Buffy The Vampire Slayer.) They do something horrible, but we’re never allowed to blame them. As Josh says, he left the group in Fillory to die, but that’s because he’s a coward. Meanwhile, he claims, the group is just indifferent to him and that’s way worse because … he’s a Nice Guy. He always does something to make up for it, so he’s forgiven or never held responsible.

Meanwhile, the bad girls like Kady and Julia are who are more often forgotten when the story is over. They are often seen as “thots” who many don’t have any sympathy for because it’s all used up on the Nice Guy. While The Magicians has Josh embody this trope in many ways, you know they’re never going to forget the “bad” women. In this episode, we don’t really know the fate of Victoria or Harriet, but it doesn’t look good. But, the other characters don’t forget about them even though they must quickly move on to the task at hand. This is where you must give a hats off to the amazing talent of the cast. You can see the pain on everyone’s face. Even though they can’t have more than a few lines about Victoria or Harriet, you can tell that they’re not left unchanged by the loss.

But, back to Josh. We cannot ignore the Nice Guy, because that often has dangerous consequences. You can see it on so much of TV (shoutout to Buffy again) and real life violence that costs real lives. If only someone had seen the value of the Nice Guy, then he wouldn’t have killed or been so angry, right? Everyone else is somehow responsible for him. Often in fiction, as in the case of Josh, the Nice Guy isn’t necessarily violent, but his abandonment leads him to do something stupid that he blames on his abandoners, and the audience is made to feel like they should, too. Meanwhile, “the abandoners” are often facing far worse grief and literally have to save the world.

In what we’ve come to expect, love, and cherish about The Magicians is that the show calls attention to this. Even if we’re supposed to think that Josh’s talk about his constant conquests is cute, at least he doesn’t hit on any of the women. His and Julia’s brief bonding in the season opener was nice and believable. “All That Josh” calls back some moments from that episode, but like a lot of Nice Guys, Josh feels like this entitles him to the group’s full acceptance.

If I had to trust someone who abandons me in a crisis, they wouldn’t be in my close friends list—e specially if I saw them at a few parties, and they always bragged about banging magical creatures. If I’d been through what Julia had, I might find myself more concerned about whether the creatures had consented.

Having seen all this, I personally loved Josh’s completely sincere version of Clooney’s “Wham Bam.” It rivals the whole cast’s “Under Pressure” performance at the end. Like most geeks, I’ve always wished I could burst into song, with no awkwardness, in those rare moments I was feeling myself. Josh lives this for me more than any other character in a musical episode I’ve seen. This is the epitome of why the Nice Guy winds up loved by everyone, despite his massive flaws. But with The Magicians, I’m sure we’ll get a callback to how this makes Josh part of the larger tale. They also did a really great juxtaposition with the other forgotten male character, Todd … or did they?

I would have preferred for the episode to be called “Under Pressure.” It’s one of those songs people take for granted. Like magic, we are so used to having “Under Pressure” in our lives. For some, it might be that song their parents play, or even the song you’re sick of whenever some TV ad wants to convey stress, but “the terror of knowing what this world is about, watching some good friends scream ‘Let me out,'”—can we just appreciate that for a second and what it means for all our questers?

Maybe this was why my favorite part of the episode was Kady successfully pushing Penny to sing, even though he really can’t. I also may’ve spilled salt over the brief juxtaposition of the fate of the enslaved fairy, Sky, during the song, as she and Penny are both in need of some liberation they can’t get alone.

I really loved how the episode used the cast members who can’t sing fully, rather than just hiding them. Of course, it’s a flustered, tattered King Eliot (who can sing and Bowie homage ever-so-subtly) who embodies the true meaning of “Under Pressure” with Margo when they sing:

“Why can’t we give love one more chance?”

Speaking of being under pressure, next week’s episode is titled “Art of the Deal,” four little words that make me want to scream “Let me out!” from the terror of knowing what this world is currently about. I trust the seven—oops, eight—to bring about a better world in The Magicians.