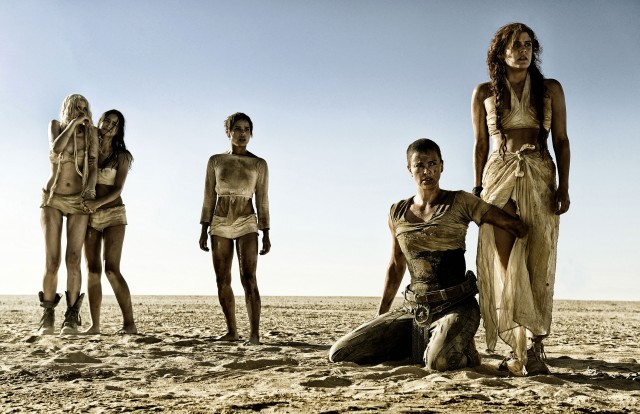 You remember how that one Mad Max: Fury Road trailer made me really nervous? It let us know there’d be a group of women in the film who were enslaved by the villain and one, if not more of them, wore a chastity belt. Yeah. Nervous. But some newly-revealed info gives me hope. Specifically, director George Miller asking feminist Even Ensler to consult on set.

Collectively known as “The Wives,” we don’t know too much about the characters at this point except they’re played by Courtney Eaton (Cheedo the Fragile), Zoe Kravitz (Toast the Knowing), Riley Keough (Capable), and Rosie Huntington-Whiteley (The Splendid Angharad). The last did an interview with Esquire in which this particular information was revealed. There are some small spoilers here for things you might not have gleaned from the trailers but I’ll also put a trigger warning here for self-harm and rape.

“I decided early on in the rehearsal period and in the period where we discovered who our characters were that my character’s torment was taken out through cutting herself. That was something I wanted to explore through these scars that she had on her arm,” Huntington-Whiteley told them of her character not just being held against her will but being pregnant through rape. “How would she feel about carrying this child? Does she have these natural maternal instincts that a lot of mother’s feel? Is she enjoying being pregnant? Is she having that time of pure love or is she angry? Does she have any regard for this child? What does she feel about that? I think that I never really knew what she was going to feel because I don’t think even she would know. I think it was all very confusing for her. She was conflicted. That’s why a lot of her actions in this film are reckless.”

The interviewer at Esquire mentioned all of this being “serious characterization you don’t see in most summer spectacles” which is certainly true. They then asked what Miller’s reference point was for how to play the scenario delicately and Huntington-Whiteley responded:

We were so lucky that George arranged for Eve Ensler, who wrote the Vagina Monologues, to fly in and work with us girls for about a week. We did extensive research with her. Eve herself has had a very intense life. She’s spent time in the Congo working with rape victims and women who have had unthinkable things happen to them through the power of men’s hands. We were able to pick her brain for a week. She told us the most tragic stories I’ve ever heard in my life, which gave us so much background to our characters. We really wanted to kind of showcase that. It was a privilege to have her around to make these characters something more then just five beautiful girls.

I’ll also add that it’s still possible all of this could go terribly wrong, but it seems as if some serious thought was given to the issues which is more than we can say for a lot of Hollywood projects utilizing these types of stories. I’ve also heard from a few people who saw early screenings and they had nothing but good things to say about women’s roles in the film. Fingers crossed this flashy blockbuster actually raises the bar for Hollywood in more ways than one.