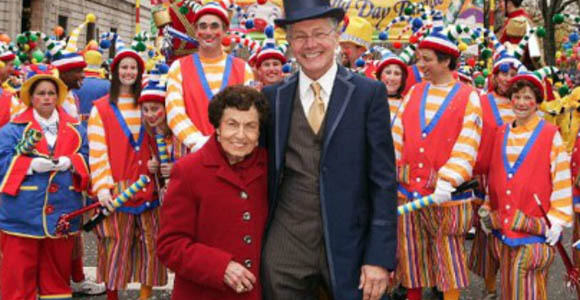 Rose Syracuse recently retired with the distinction of being Macy’s longest-serving employee with 73 years at her post. “This was my first job and I didn’t go anyplace else,” Syracuse told The NY Daily News. “I was happy here.”

Gone With the Wind was in theaters for the first time when Syracuse started work at the department store in New York, itself around for over 150 years. “You had to be good in order to be here,” she said. “You had to go through a lot of tests.”

“When she started at the store, credit cards were decades away,” writes the Daily News. “Customers deposited funds into accounts they held with Macy’s, then spent what they’d deposited. Syracuse worked as an authorizer, managing these accounts. She went on to work for decades in the store’s phone and mail order department, until the Internet made her job obsolete.”

But don’t think technology is what pushed Syracuse out the door. No, unfortunately it was a broken hip six months ago that did that. Otherwise, she’d still be working. For the last three years, she’s worked on archival projects for Macy’s annual Thanksgiving Day Parade and other special events. She even had the honor of cutting the ribbon for the parade in 2008.

“Macy’s CEO Terry Lundgren presented Syracuse with a bouquet of roses on bended knee — as if to celebrate his employee’s long marriage to the so-called “World’s Largest Department Store,” writes the Daily News. “For us to be able to say that we’ve had anyone work for our company for 73 years is just a milestone that will never again be repeated,” he said.

Although her impressive tenure is over, Syracuse will never leave Macy’s behind. “I don’t shop any place else,” she said. “I’m still a customer.”