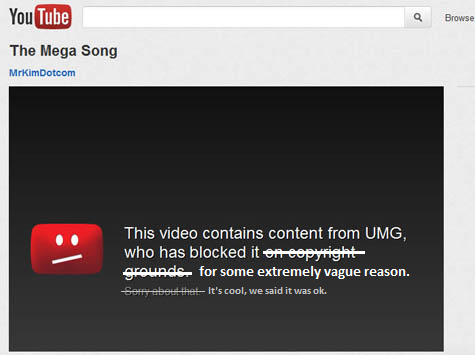 The latest development in the Universal-MegaUpload battle is almost as unexpected as it is troubling, and suggests that YouTube probably isn’t the neutral party you thought it was. In order to protect the Mega Song and get it back up on YouTube where it could stay unmolested, MegaUpload filed a restraining order against Universal that would keep them from messing with the video until they could provide proof of infringement, thereby validating the DMCA taked0wn request. In a bizarre twist, Universal has said that won’t be necessary: The takedown was not a DMCA affair but rather the result of a private contract between Universal and YouTube, the critera of which are not limited to mere copyright infringement. Say what?

It seems that Kim Dotcom’s impression that the takedown was through the DMCA — a very reasonable assumption, I might add — was quite incorrect. The takedown did not, in fact, have anything to do with copyright law, but rather this unseen agreement. I say unseen, because at the moment, no one in the press has been able to drudge up a copy. I have to wonder whether or not YouTube told Universal they could bring this all up.

In the statement to the judge presiding over the hearing about the restraining order, Universal said the following:

The UMG-YouTube agreement grants UMG rights to effect the removal of user-posted videos through YouTube’s Content Management System (‘CMS’), based on a number of contractually specified criteria that are not limited to the infringements of copyrights owned or controlled by UMG.

Wouldn’t you just love to know what those “contractually specified criteria” are? Part of me wonders whether or not one of them is just “we don’t like it.”

For the moment, the Mega Song is back on YouTube, but it seems as though the victory might be a temporary and hollow one. There’s no real telling why it’s back right now, but the way things played out in the courtroom suggest that Kim Dotcom and MegaUpload really have no basis to argue that the takedown was illegal anymore. If it was a DMCA takedown, then yes, it would have been illegal and there would have been repercussions for it, in theory. But because it seems that the takedown is due to a perfectly legal agreement between two private companies who totally have a right to do this kind of thing, there may not be the kind of legal fallout everyone at MegaUpload was hoping for.

Of course, the most troubling thing about this all, is the surfacing of this Universal-YouTube agreement. I, and most others I think, had always assumed YouTube was a relatively neutral party in the takedown process and that their pro-takedown bent was just a bid to minimize liability. If they have an agreement like this with Universal though, it looks a lot more like YouTube is sitting in a plush, corporate pocket. The other thing worth wondering is: If YouTube has a takedown deal with Universal, do they have one with Viacom too? And who else on top of that? Hold on everybody, this just got a little weirder and a lot more scary.

UPDATE: As you might expect, YouTube has come out and said that they do not have an agreement with Universal that allows for takedowns of non-infringing material. YouTube’s statement via The Next Web:

“Our partners do not have broad take-down rights to remove anything they don’t like from our service. In limited cases, if they so choose, and based on exclusive agreements with their artists, partners can take down live performances.”

In light of this, it’s be reasonable to assume that Universal was just lying about their access to YouTube’s Content Management System. The fact that the Mega Song is still live on YouTube supports that assumption. Something about the whole situation still smells a little fishy, but it’s still a little unclear who’s hiding the fish.