How Lore Olympus and Webtoon Finally Helped Me Love Comics

It was all Greek to me—now that's a good thing. You’d think a story that’s a few thousand years old wouldn’t be gaining new fans in our modern era, but the myth of Hades and Persephone is seeing a resurgence lately that almost feels like divine intervention. From a Broadway musical, to tumblr memes the ancient tale of the God of the underworld and his stolen bride is all over the internet. But its most vibrant interpretation can be found as the most popular story on an app I’d never heard of until a few months ago: Webtoon, where Lore Olympus is the jewel in its crown. This little app and ancient story did something I didn’t think was possible: made me love comics.

So, we’ll start with my dark geek confession: I’ve never been able to get into comic books. It’s not that I don’t love the stories. I know from the amount of time I’ve spent crying over the MCU and loving the Arrowverse that comic characters and their adventures are my catnip. But getting into actual comic books was always daunting to me. Just figuring out how to buy them felt like learning a foreign language, and a lot of the artwork and the way many mainstream comics objectify women was a turn off. But the biggest hurdle for me in reading comics is that they were literally hard to read. As in, the way comics are laid out and the conventions of dialog bubbles were almost physically painful for my brain to process.

You see, I’m a fast reader. Very fast. I don’t read a sentence one word at a time; I see the sentence as a whole and my brain organizes it. This is great for reading books or articles online but it’s terrible for comics. The typical format of comic books forces me to slow down and carefully parse and piece together every panel and it just didn’t work for me and I know I’m not alone in that. But on Webtoon, things are different.

Instead of a typical comics layout of a full page, Webtoon is (obviously) laid out to be read easily on a website or a phone. A single panel fills your entire screen, either on a computer or your phone, and you just scroll down. It’s simple but to me, it was revolutionary. Suddenly, a medium that was so inaccessible to me was engrossing and the Webtoon format didn’t just make comics easier to read for me, it made them better. 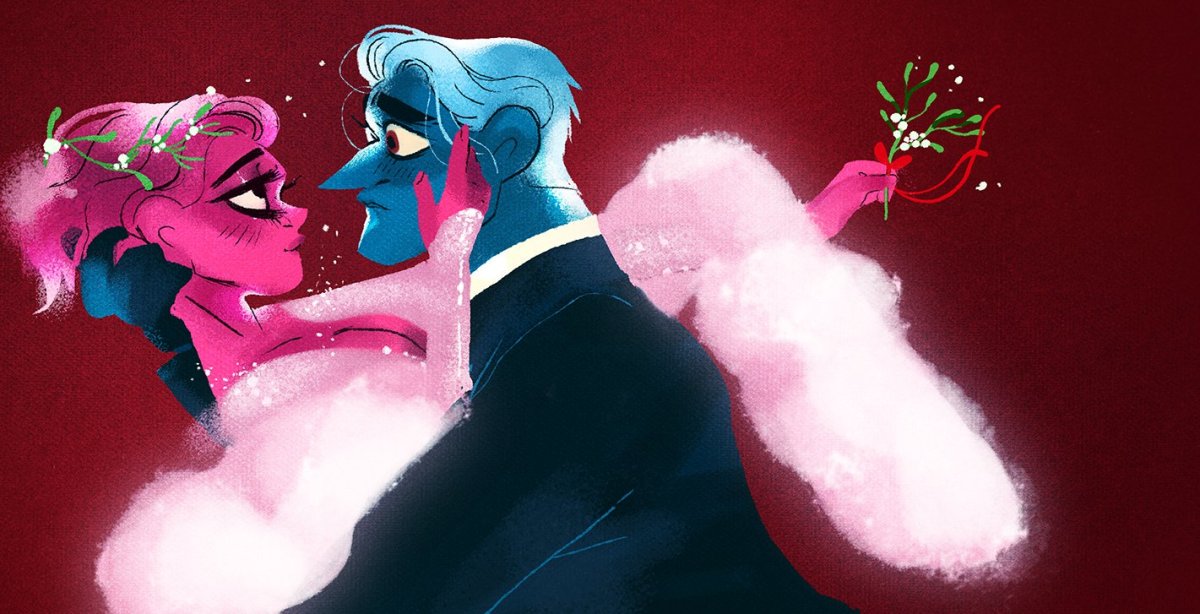 Here’s where we come to Lore Olympus. I was sucked in be a few images on tumblr and twitter. Beautiful, evocative designs of a pink, alluring Persephone facing down the hounds of a blue, angular, Hades. The water-color like style and deep colors appealed to my artistic side and I’ve always loved the original myth, where Hades, God of the dead, kidnaps Persephone, daughter of Demeter, goddess of the harvest. I finally clicked on the link back in July…then didn’t stop reading for about seven hours. It was so easy to read and the comic is just wonderful.

Lore Olympus is a tale of Greek gods and their travails, but with a modern sensibility. While the mortal world is still in ancient times, Olympus and the Underworld resemble our modern era – with computers, cellphones and social media (including Fatesbook). Persephone and Hades meet at a party and communicate by text. Hermes is a runner bro. Hera wears power suits. Zeus is…still a cheating piece of crap. It’s all so charming and creator Rachel Smythe is a master at using the format, including the very act of scrolling down, to create a propulsive story full of humor, sexiness and mystery. There’s a movement and grace to these images I’d never experienced before and I’m obsessed.

Rachel Smythe, the creator behind Lore Olympus explained to The Mary Sue how the format of Webtoon, and the specific vertical format lends itself to dynamic storytelling:

I really like working with the vertical scrolling format because It gives me more freedom within my storytelling. If a moment needs a lot of space for pacing, the vertical scroll lends itself really nicely to be able to easily expand or condense panels depending on what kind of effect I’m going for. And there’s less pressure involved in typesetting!

I also really enjoy the element of surprise you get with the vertical scrolling format. I can make a moment really impactful by having a full width, full screen panel to really showcase an important story element. I’ve learnt a lot about visual storytelling from working this way. 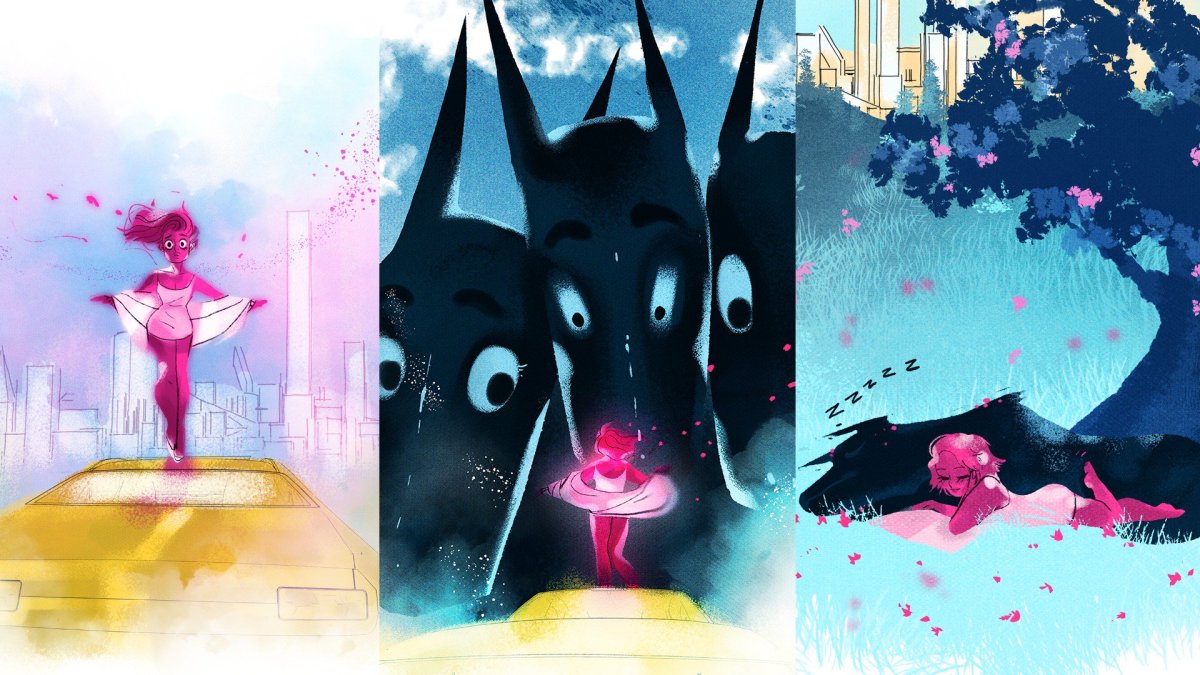 Webtoon is also a great place for independent artists to grow an audience and thrive, which is how Smythe found success. “The reason Lore Olympus has the audience it does is in part because of how Webtoon is structured,” Smythe explained to me. She originall started posting Lore Olyous on the Canvas, the free user platform from Webtoon, which got her story in front of audience that already loved webcomics.  “It meant that way more people found my comic than if I’d posted it to a private domain,” Smythe told us. “The success of my Canvas version of Lore Olympus is what encouraged Webtoon to offer me a position as a Featured artist. I decided to reboot the story at that point and it’s been an amazing ride ever since!”

This platform is appealing because it has such a variety of stories, styles and genres. Many of the top comics are romances, which isn’t something you see emphasized a lot in typical, superhero books. Smythe agrees:

Webtoon is a great publisher to work with, and I really I enjoy their all-inclusive approach to comics. I’ve never been made feel like romance comics are an inferior genre which only exists “to keep the ladies happy”. Webtoon knows that romance is a valued genre which deserves to be treated with respect and dignity. They also have a really diverse range of featured authors, which it so awesome to see.

Webtoon is great example of modern media, really. It’s a democratized space where good content can gain a following, and I’ve already discovered other stories and comics I enjoy on the platform (my wife is obsessed with the cute, queer fantasy Mage and Demon Queen). Not only is this a fun place to read comics, but it’s free which is always a good price.

Getting into comics through Webtoon has awakened hope that I can read more traditional comics the same way, since I know mainstream comic publishers are releasing more and more comics digitally. Although I’m still daunted by the sheer volume of some sagas and don’t quite know where to start, if they’re anything like this though, in a format that finally works for my eyes and brain, I’m excited to dive in.