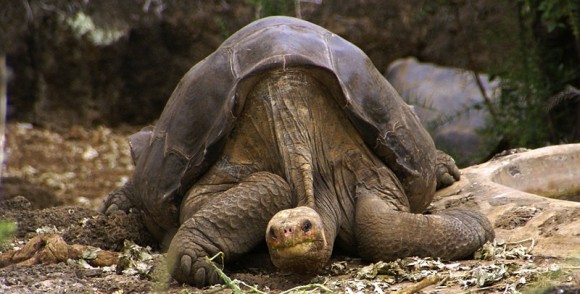 He was only about a hundred years old, but the last known giant Pinta tortoise, Lonesome George, has passed away. Widely assumed to be the last of his subspecies, George was anything but lonesome for much of his life, having spent many of his days at the Galapagos National Park in Ecuador. And he wasn’t even that old, relatively speaking; many species of tortoises can live up to 200 years. It’s sad that George left us while in his prime. Or a midlife crisis. Either way, it’s always a sad day when another animal goes extinct. So long, Lonesome George.

Despite many attempts at producing offspring, George was never able to provide the next generation of giant Pinta tortoises. Not even with all those lady tortoises, providing George with the best harem zookeepers could rustle up. But alas — George was shooting blanks. And now, he is among the dinosaurs.

But seriously, park officials will investigate what caused George’s untimely demise since it appears that he went way before what is considered “old age” for a giant tortoise. First spotted by a Hungarian scientist in 1972, George was determined to be of the Chelonoidis nigra abingdoni subspecies, which everyone had assumed had gone extinct. But there was George, still living it up in the balmy Galapagos Islands. Recognizing their amazing find, scientists promptly incorporated George into the Galapagos National Park breeding program, where many attempts were made to get him to mate, but were all unsuccessful.

Different breeds of tortoises were what helped Charles Darwin form his stories theories on evolution. He may have even come across some of George’s cousins in his travels.

After being necropsied, George will most likely be embalmed and put on display. While alive, he served as an attraction on the Galapagos Islands, which see about 180,000 tourists a year.

Godspeed to you, Lonesome George. Your many, many lady friends will miss your wily ways.