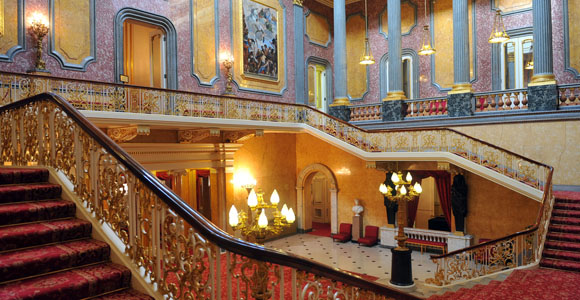 If you thought the royal wedding was a party, wait until you hear this. Queen Elizabeth II has approved renting out certain rooms at St. James’ Palace as party venues during the 2012 London Olympics. Lampshade, meet head.

St. James’ Palace is one of England’s oldest and was commissioned by Henry VIII during his reign in the 1500s. No sovereign has maintained a residence there for over two centuries but it is still used quite frequently. Most recently, Prince William and Kate Middleton posed for photographs at the palace after announcing their engagement.

According to the Associated Press, “Buckingham Palace says holders of royal warrants — companies with long-standing ties to the royal family — will be given a chance to rent the rooms, called state apartments, during the games, which begin July 27 and last until Aug. 12. A palace spokesman, who spoke on condition of anonymity, declined Monday to say which state apartments would be available, but the palace has the Throne Room, the Tapestry Room and the Queen Anne Room, among others.”

Britain’s Daily Mail reports the price of renting one room in the palace for one day would be around $47,500.

“Corporate sponsors of the games are willing to offer millions for the chance to be closely associated with the Olympics. Besides the name recognition, those sponsors get tickets — and hold lavish parties where they bring their most important clients,” writes the AP. “By allowing royal warrant holders the chance to rent rooms for events, the queen will be helping businesses that mostly are too small to pay what that the likes of Coca-Cola, McDonald’s and Visa hand over to be tied to the Olympic movement.”

This unprecedented move is also inspiring others. Victoria Wallace, Leeds Castle’s chief executive, said she might consider renting the castle which is an hour outside London. For both parties, sounds like a good way to make money and have a royal blast at the same time. Now who do I know that has connections to the royal family…