League of Legends Bots Will Soon Play Like People

So they'll quit halfway before the match ends if they're losing? Great. 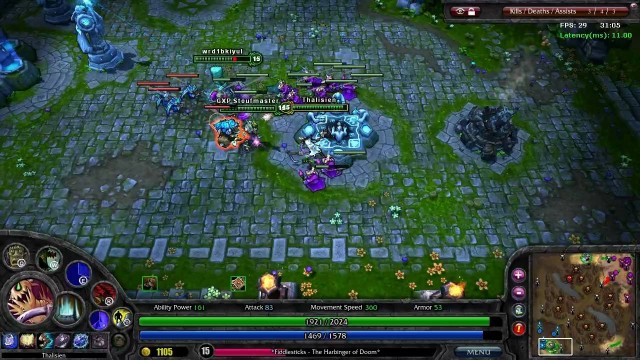 Playing a complicated strategy/fighting game with artificial intelligence can always be a bit of a crap shoot. You don’t have to worry about a fellow player leaving you out to dry, but AI is also usually fiendishly stupid. Now with a new update, LoL bots will maybe be a little dumb so when you need them to be. Now if only we could get them saying sexist and racist stuff all the time. Then it’ll be just like playing a video game with real people!

As the League of Legends development team explains in their latest blog post, they developed the new system after discovering players really wanted bots that were “less predictable and focus on the same game elements that players do, such as last hitting and nailing their combos.” Called Threat Evaluation, the method by which bots determine future threats by accounting for damage already received will now be expanded to factor in how many spells the bot and any nearby enemies might have first. Design analyst “Roamingnumeral” clarifies:

In an FPS, [the previous system] makes a lot of sense. If a bot walks around a corner and takes a bunch of damage, it’ll probably keep taking that damage if it hangs around, so it’s best to back off.

League of Legends works a bit differently. If Veigar unloads all of his spells on a bot, and the bot survives, that isn’t the time for the bot to run. That’s the time for the bot to destroy that evil little @$!#!. Veigar has almost no damage potential while all his skills are on cooldown, so why not get a few shots, or maybe a lot of shots, in while he’s vulnerable?

The bots still aren’t perfect yet, of course — the dev team can’t quite make them adept wall climbers and junglers, as both behaviors are still too difficult for their AI to understand.   However, they can also now attempt to dodge skill shots (though they aren’t very good at it yet), and their spell combos and item builds will be a little bit better from here on out.

The development team says they will continue to “look for ways to build on the new bots and better tailor a Co-op vs. AI experience for players’ first few games” as their next project, and hope to make this update available as soon as possible.

(via Polygon, image via League of Legends)