Nobody let these dudes see a picture of what Lara Croft looked like in the '90s. 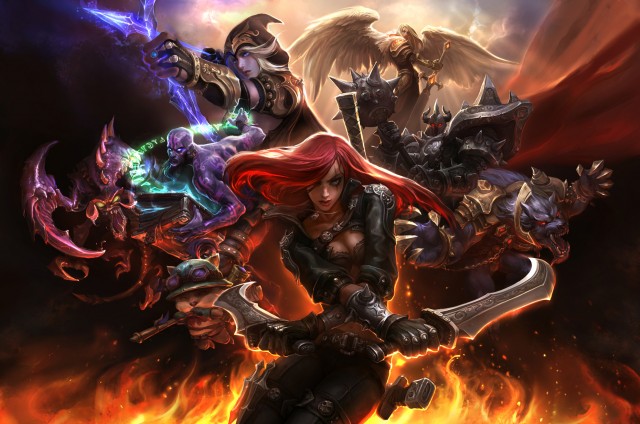 For a fighting game, League of Legends has a surprisingly decent ratio of female champions to male — at 39 out of 104 it’s not completely even, but it’s better than the standard “token broad” you get in most fighting games. So it’s a pretty huge bummer that an unofficial LoL tournament in Iran felt it necessary to ban most of the female champions from the tourney.

According to a translation of the 2013 World Cyber Games’s Facebook page, the following characters have been banned outright from all League of Legends tourney games:

For those of you who don’t feel like counting, that’s 36 out of 39 female champions, and more than a 3rd of all the champions in the game. The only ones left are Anivia, who is a giant phoenix made of ice, and Annie and Poppy, who are both little girls. According to alternate sources, however, even Anivia and Poppy are out of the question. Sure, keep the one little child over a enormous ice bird. That makes sense.

Rumor has it that they are considering letting several of the characters back in — Diana, Fiora, Karma(but only her traditional skin), Kayle, Leona, Lissandra, Lulu, Lux, Nami, Quinn, Sejuani, Tristana, and Vayne. My guess is their concern lies with the fact that while most of these characters are technically clothed from head to toe, most of them are still very sexy adult women.

Here are the things that bum me out about this, in no particular order:

1. That there are only three female characters in the entire game who aren’t also sexy. Not that there’s anything wrong with being sexy, of course, but sometimes all you really want is crush your enemies while coincidentally being female, you know? Like, there’s a male character who is an actual Groot-style tree. Maybe I wanna be a tree but still be referred to with feminine pronouns, ya dig? A lot of male players claim that they use female champions because of their game mechanics and not their sex appeal, anyway, so why not make some of ’em less sexy just for variety’s sake?

2. The creators of this tournament are so squeamish about the adult female body that they’re considering leaving out characters who are wearing full body armor like Kayle or Leona  — or hey, what about Tristana? She’s the same build as Poppy and Annie, why’s she still “under consideration?” Is it the giant gun? Why so arbitrary, guys? Did you just pick the champions you were attracted to because you thought they were going to be too distracting to you, personally?

3. While it’s tough to tell whether or not there’s a ban on actual female players in the tournament, what kind of lady gamer is going to want to participate in a that thinks the 3d polygons on a made-up mermaid or spider-queen are too much to deal with? Probably none, and that’s a shame.

The tournament is set to be held between September 12 and September 16th, so with any luck they’ll maybe decide to let some of the champions they’ve banned back in. Although come on — you know you wanna see somebody win this thing as Annie now. How ironically awesome would that be?