If Logan’s Run is Successful, We Might Get Christina Hendricks as Wonder Woman 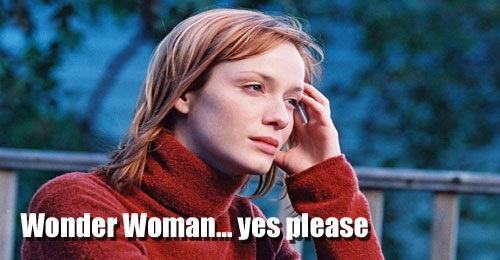 Honestly, it seems like it’s every couple of days when someone in Hollywood wants to do a Wonder Woman adaptation. Still, we will support their efforts more often than not, because if someone can do it right, it’s practically guaranteed to be awesome. Especially if, as Drive director Nicolas Winding Refn is dreaming about lately, said adaptation stars Mad Men dynamo Christina Hendricks. OH HELL YES. Refn says that he’d love to take a stab at this project, but that the only real way it could happen is if his current project, Logan’s Run, is successful enough for studios to give his next project a chance.

So, you know, no pressure or anything.

Honestly, of all the people we can think of off the top of our heads as people I’d be excited to see step into Wonder Woman’s boots, Christina Hendricks is right at the top, and it doesn’t even have much to do with her truly epic curves; she’s proven herself in the past few years as one of the strongest actors on television, bringing a quiet but supremely forceful power to the character of Joan Holloway. People always say that Mad Men would be nothing without Jon Hamm (we agree), but we think the same could be said of Hendricks’ Joan. We’ve seen her before in geek culture with her turn on Firefly, but we’d love to see what she can do if we hand over the reigns of a full-on franchise to her.

But we do have to remember that this is all still in full-on rumor mode, so it’s still very possible that this thing will never even get made, and it’s even less certain whether Hendricks would even accept the role. But a girl can dream.

Of the possibility, Refn said:

I would love to make Wonder Woman. And I also think that Christina Hendricks would be the perfect Wonder Woman, but Warner Bros. haven’t called yet. But I’m getting closer with Logan’s Run. I think someone said to me in a meeting that if I get Logan’s Run right, then I’ll get Wonder Woman.

Logan’s Run itself has had a pretty tumultuous production history, with director switches and scheduling conflicts. Now it seems to really be a go, however, deirected by Refn and starring Ryan Gosling.

Honestly, Logan’s Run sounds pretty interesting. From what we’ve heard so far we’d be happy to go see it when the time comes, especially if it would up the chances of a Hendrick’s-helmed Wonder Woman.