Now You Can Live in the House Where Lizzie Borden Lived After (Allegedly) Committing Murder!

Before getting all excited, no, the house for sale (pictures after the jump) is not the house where Lizzie Borden allegedly murdered her father and stepmother with a hatchet. That place, the Lizzie Borden Bed & Breakfast and Museum, is not for sale, but you can drop by for a visit! (Don’t forget your trusty ghost-detecting equipment!) On the other hand, the house that is for sale is Maplecroft, where Borden lived following the murders and the subsequent trial. So, if you’re looking for a lovely Victorian home in Fall River, Massachusetts in the $650,000 range, this could be the house for you!

Maplecroft, where Borden lived from 1894 until her death in 1926, is a 3,697 square foot house with “seven bedrooms, four bathrooms, a grand entry foyer, two sunrooms, seven fireplaces, original parquet floors, tin ceilings and mahogany moldings.” So it is a perfect place to raise a family of innocent non-murderers. Here is a picture, via Affordable Real Estate: 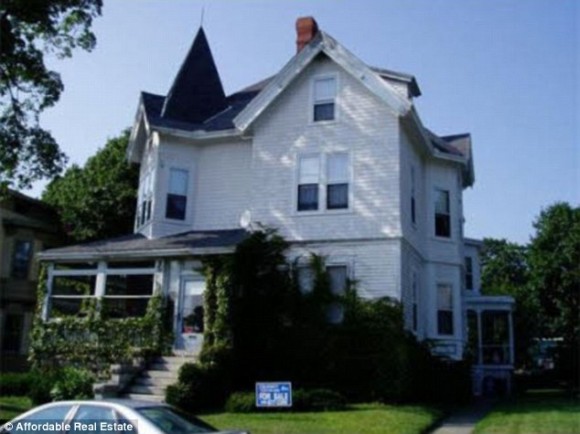 Can’t you just see yourself and yourself peacefully living out your days, free of guilt and shame, completely at ease in the New England suburbs? The current owner, Robert Dube, bought the house for $60,000 about 30 years ago and says he’s downsizing. This isn’t the first time he’s tried to sell it, and he’s also tried to turn the house into apartments and build another single-family house on the property without success. Since Borden, four other people have owned the house since her death, and real estate agents expect that the history should generate enough interest for a buyer. Unlike the Bed & Breakfast, this house is not known to have any supernatural goings-on, but it is worth mentioning that Lizzie’s funeral was held there before she was buried.

After Borden was acquitted of the double murder, no one else was ever arrested, and the crime remains unsolved. But while some of the evidence against Borden is downright sexist (like how some blamed her period for her homicidal rage), pretty much everyone will say that she was the one who issued the infamous “40 whacks.” Mostly because she was said to hate her father and stepmother, though newly discovered trial notes may have proven otherwise.

Remember though, if you aren’t looking to move or buy a house, but are still a sucker for vintage murder stories, I’ll go ahead and once again recommend the Lizzie Borden Bed & Breakfast for a weekend of home-cooked meals and possible hauntings.

(The Herald News via The Daily Mail)