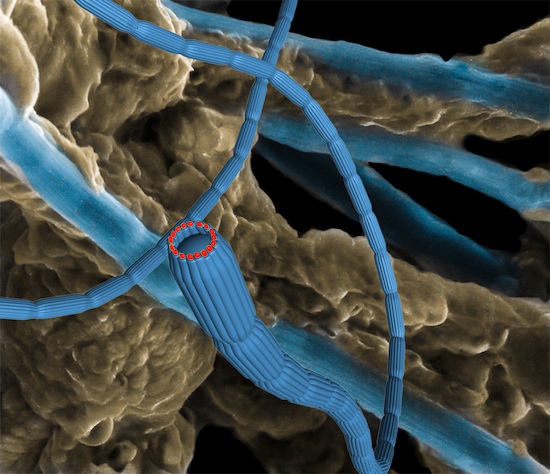 Anyone who has made it through an 8th grade science class can tell you that electricity and water don’t mix very well, which is why Spider-Man always whoops Electro’s butt with a water gun. It’s also why researchers from Aarhus University in Denmark were baffled three years ago when they discovered areas of the seafloor conduct an electric current. Today, the same research team announced that they’ve discovered the cause behind the current: A never before seen species of multicellular bacteria that lives in the mud of the seafloor and acts like living electrical cables.

The search for the source of the current started by looking for a way to shut it down, which researchers did by laying a non-conducting wire in the mud. That stopped the current, just the way slicing a cable in your backyard could cut off power for the neighborhood, a finding that suggested the current was travelling through a physical medium very much like a wire. After sifting through the muck for some time, researchers found the new species of bacteria.

The as yet unnamed beanpole bacterium is about a centimeter long, but 100 times thinner than a human hair. Once researchers got a look inside of it, they knew they had their culprit — a creature whose basic biology is that of long, electrically conducting filaments packed inside an insulated membrane that is, for all intents and purposes, an electric cable writ small and built from living cells. The fact that they found the bacteria wherever they also found electric currents running through the seabed provided further confirmation that these biological cables were responsible for electrifying the sea floor.

With plenty of samples of the new bacteria to study — as much as a kilometer of the bacterium can be found in just a teaspoon of seafloor sediment — the Aarhus team is eager to start studying the creatures in earnest. They’ll be looking to learn as much about the past of the bacteria, and what role the current they produce may have played in the development of ocean life, as they are about the future, where the prospect of bacterial wires and cables could one day have major implications in biotechnology and engineering.