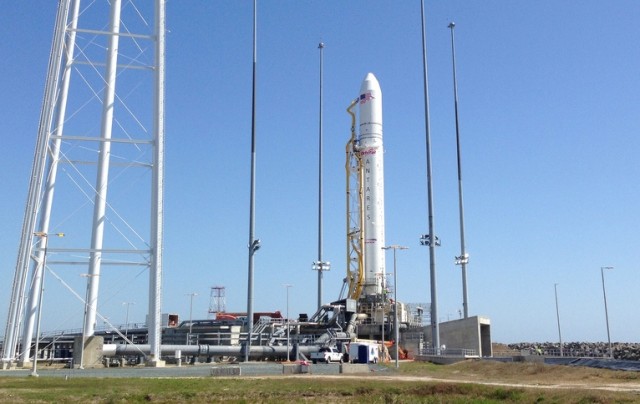 Today is launch day for the test flight of private company Orbital Sciences’ Antares rocket from NASA’s Wallops Flight Facility in Virginia. The launch is set for 5pm ET with coverage starting at 4pm ET on NASA TV. You can watch that live stream right here, or — depending on where you live — just go outside and look to the skies.

A decent portion of the east coast should be able to get a view of the Antares in flight, which will appear as a bright light in the sky. For those of you elsewhere in the world, or just afraid of going outside, here’s the NASA TV live stream:

Orbital Sciences reps said, “The best chance to see the flight extends from about Cape May, NJ southward through the Outer Banks of North Carolina. Also, if you happen to be in Bermuda, you will likely have a clear view of Antares as it rockets by.” So there you go.

In the future, the Antares will be carrying Orbital Sciences’ Cygnus capsule, but today’s launch is just a test flight for the Antares, so it’s not carrying anything useful. Its payload is being referred to as a “mass simulator” to show that the rocket is capable of supporting a Cygnus capsule.

(via Space.com, image via brownpau)