How to Brush Your Teeth in Space | The Mary Sue

Chris Hadfield Shows How to Brush Your Teeth in Space [Video] 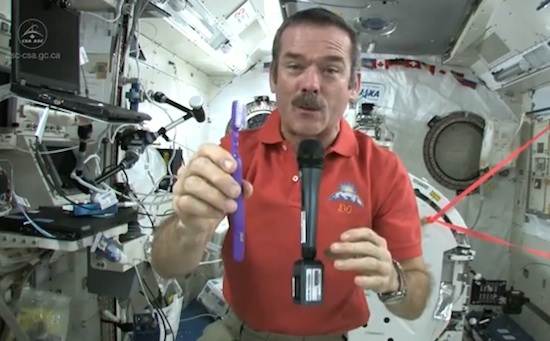 At some point in their lives, nearly every right-thinking kid wants to be an astronaut, because being an astronaut is awesome. You get to ride a rocket ship, live in zero gravity, and dine on freeze-dried Neapolitan ice cream, which is clearly the food of the gods. Being an astronaut isn’t all awesome, though, as things like basic personal hygiene can get complicated in space, and sometimes even downright gnarly. In his latest video message to Earth, ISS Commander and Unofficial Explainer of Things That Happen in Space Chris Hadfield explains why being able to gulp down a mouthful of toothpaste is one of the many keys to being a successful astronaut.

Time to put another item on the ‘Reasons I’ll Never Be An Astronaut’ list — can’t do the swallowing toothpaste thing. Grosses me out every time. It’s like trying to eat a minty, poorly-cleaned oyster. I’m sure glad that this particular dream of mine was shattered on the rocky shoals of real life long, long ago, though, because man, this would be an embarrassing deal breaker.