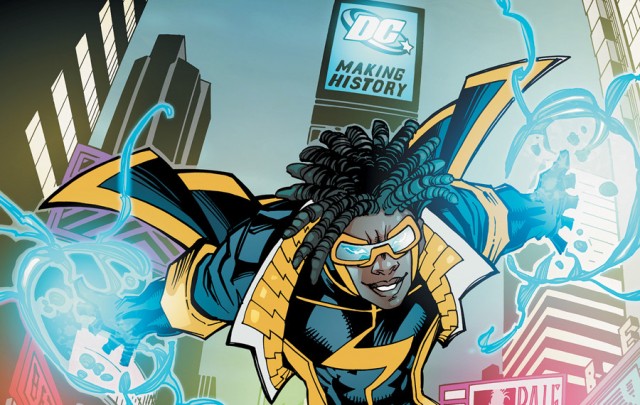 This’ll put a shock to your system!!!

Created by Dwayne McDuffie, Robert L. Washington III, and John Paul Leon in the early 90s for Milestone Comics, Static (aka Virgil Ovid Hawkins) quickly became a fan-favorite moving on to DC Comics, his own animated series, Static Shock, and other adaptations.

Well, as it turns out, The Hollywood Reporter says Warner Bros. has unveiled a new digital production unit called Blue Ribbon Content. The studio will be led by Sam Register, president of Warner Bros. Animation and Warner Digital Series.

“Blue Ribbon has already given series orders to three shows, including an untitled Mortal Kombat series produced in partnership with Warner Bros. Interactive Entertainment that is tied to the upcoming Mortal Kombat X video game release in April 2015,” they write. “The action series include Static Shock, an adaptation of the Static comic from writer-producer-director Reginald Hudlin (Django Unchained). Also in development are Ouroboros from Akiva Goldsman (Paranormal Activity) and Damon Santostefano, which follows two police officers over one night in a remote part of Wisconsin.”

This is amazing! And great news to add to the pile of diversity Warner recently announced in their feature film slate.

Batman: The Animated Series Experience — As previously announced, Blue Ribbon, DC Entertainment and visual effects pioneer OTOY are teaming up on an immersive entertainment experience that will see the Batcave from the acclaimed Emmy Award–winning Batman: The Animated Series brought to life via interactive holographic video for virtual reality displays. OTOY is collaborating with series producer Bruce Timm on this interactive narrative experience which will give fans the opportunity to explore Batman’s world like never before, allowing them to feel what it is like to be inside the show’s stylized universe on devices such as the Samsung GALAXY Gear VR, the Oculus Rift, and on forthcoming “glasses-free” light field displays that will power future TV and mobile devices.

Also in the same story and possible of interest to our readers, “The unit’s development slate includes three comedy and three action/sci-fi projects. On the comedy side is Ginger Snaps, which chronicles the competitive and ruthless world Girl Scouting from Sonali Patel, a staff writer on NBC’s A to Z, and Golden Revenge, about a cat and dog abandoned after their owner gets married.”

No dates of release or exact venue for this new Static Shock series has been released but will you be watching?