Sometimes Some Crimes Go Slipping Through The Cracks 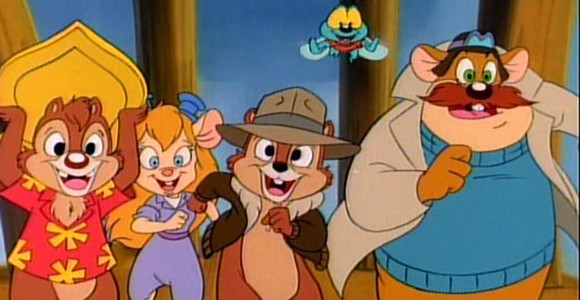 Yes, you read that headline correctly.  Disney has optioned a pitch written by award-winning commercial director Robert Rugan (who is apparently most famous for this condom commercial) and produced by Mandeville Films/TV for a live-action + CGI Chip ‘n’ Dale movie about the origins of our favorite Rescue Rangers. Mandeville, of course, is behind the new Muppets movies, so this news isn’t entirely terrifying.

While Chip ‘n’ Dale have been around a long time, they really became beloved for many because of Chip ‘n’ Dale: Rescue Rangers, the animated show that was a part of the Disney Afternoon in the 1990s.  Surely many of those fans who were children in the 1990s now have children of their own that they’d love to share the Rescue Rangers with, so this isn’t a terrible decision in regards to timing. Unfortunately, many of the live-action/CGI remakes that have been created lately to cash in on nostalgia are just not as good as the originals they’re based on.  As ScreenRant put it:

Nowadays, live-action takes on nostalgic cartoons are generally lucrative, but they’re a very iffy proposition quality-wise. Part of the problem is that these recent live-action/CGI franchises like Alvin & the Chipmunks and The Smurfs have loaded on adult irony, at the expense of the innocence and irreverence that made previous incarnations so charming; the other problem is that photo-realistic CGI versions of hand-drawn characters from the 20th century tend to turn out, well, awkward (see: CGI Garfield, etc.).

Let’s not pretend that the words “live-action Chip ‘n’ Dale movie” didn’t just make you a little queasy.  For people of my generation, there are a lot of fond memories of afternoons spent in the company of Chip ‘n’ Dale: Rescue Rangers and while a new animated version of the show would be welcomed happily, the idea of a movie along the lines of The Smurfs makes me really sad.  Give me animation, comics, etc. but why, why in the name of all that is holy, would anyone think that the world needed a live-action/CGI combo movie about Chip ‘n’ Dale?!  Hopefully Mandeville producing the film will keep it more in line with the charm of the newer Muppets films then with the lackluster Alvin & The Chipmunks or The Smurfs films, but only time will tell.

(via the Hollywood Reporter)