Little Firefly and The Episode You Probably Never Wanted To See 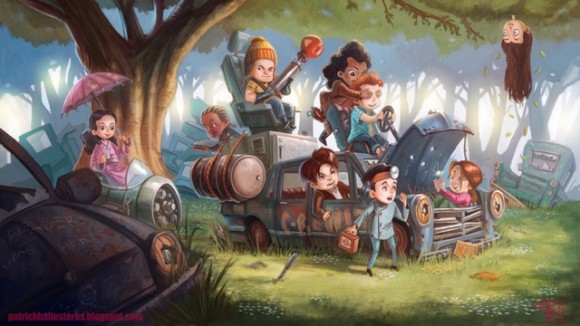 Ok, first off, check out this adorable Firefly fan art from Patrick Ballesteros (He calls them “Brownie Coats”). Now imagine them all covered in dog pheromones. Wait, what? Care to guess who’s idea that episode was?

Entertainment Weekly recently interviewed the cast and Nathan Fillion described an episode Alan Tudyk wanted to make. It went something like this:

He had a great one where there were some criminals who engage in illegal dogfights, and there was a planet where one side of the planet was perpetual night. They had these big, feral dogs there that were so mean and awful, and we had to go out and trap them. We had this dog pheromone of some kind, and Jayne was messing around, and splat!, the thing bursts and we’re all covered in this pheromone. So we have to run back to the ship with these feral dogs chasing us, and we get the dogs back to the hold of the ship, and we’re safe. But in the journey back to get them back to the criminals, River comes in, communes with the dogs, and domesticates them. So now they’re the same dogs, just nice.