District 12 Gets Pizza Delivery Thanks To Lionsgate Domino’s Deal 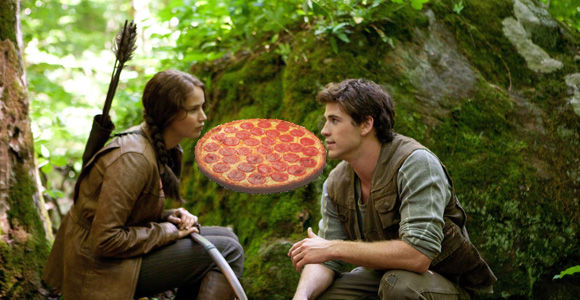 Don’t worry, name brand pizza won’t be showing up in The Hunger Games: Catching Fire next year but fans of the film (and others) in the UK will be able to get pizza and a movie in a flash thanks to a new deal between Lionsgate and Domino’s.

Lionsgate U.K. has made a video-on-demand deal with the pizza delivery service. I’m sure there’s been home video delivery services at some point but this will be the first time the U.K. will be able to get both a movie and a pizza at the same time. Here’s how it will work:

Domino’s said customers ordering pizza from its website will also be able to watch Lionsgate titles streamed direct through a PC/MAC, mobile and tablet on a rental basis.Customers will order, receive a code, and be able to stream recent titles such as The Hunger Games and What to Expect When You’re Expecting, and library fare such as Scream and Dirty Dancing while eating the pizza of their choice.

“We pride ourselves on offering a vast choice when it comes to pizza and the same is true of Domino’s Pizza Box Office — whether you’re into action, horror or romcoms, there’s something for every pizza-eating occasion,” said Domino’s sales and marketing director Simon Wallis.

So what’s the advantage of getting your movies through Domino’s rather than streaming services you already use like Netflix, iTunes, or Amazon? None from what I can tell. It’s not made explicitly clear if you get the movie free with your pizza purchase or if it’s an “add-on” like an appetizer or dessert. Either way, what do you make of Domino’s getting into the movie business?