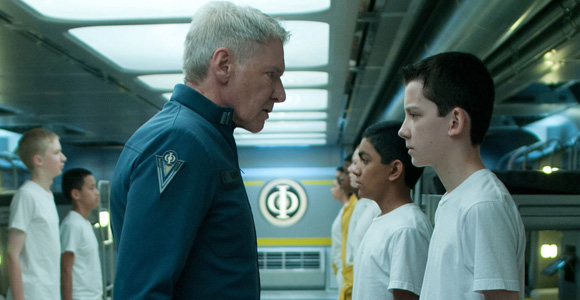 Lionsgate has issued an official statement to distance themselves from Orson Scott Card, the creator whose book their new movie Ender’s Game is based on.

We’ve been discussing the author recently on The Mary Sue thanks to a call to boycott the Summit Entertainment/Lionsgate film by Geeks OUT, an LGBT website celebrating pop-culture. The call for a boycott was just that, an attempt to let a wider audience know of Card’s personal beliefs and active participation in the National Organization for Marriage, a group working against equality for all human beings, and let said audience decide if they’re ok with some of their money possibly going to further that cause.

Not everyone agreed with the boycott, and not because they side with Card, but because they feel he and his work are separate entities, that he’s getting money either way, or because other, hard working people might take a hit from such an event. But people are certainly divided on the subject. Some refuse to see the film, some will see it but give money toward organizations helping to further equality, while others have admitted they’ll pirate Ender’s Game as soon as it’s available. No matter how you look at it, the controversy currently swirling around the film can’t be good for sales. Especially when Card went and publicly asked people to be tolerant of his intolerance.

And earlier story had unnamed executives at Summit Entertainment saying they were going to try and keep Card as far away from the film’s publicity as possible. But after the boycott call, and what must be thousands of posts in support of said boycott, Lionsgate decided to make a public statement. It reads:

As proud longtime supporters of the LGBT community, champions of films ranging from GODS AND MONSTERS to THE PERKS OF BEING A WALLFLOWER and a Company that is proud to have recognized same-sex unions and domestic partnerships within its employee benefits policies for many years, we obviously do not agree with the personal views of Orson Scott Card and those of the National Organization for Marriage. However, they are completely irrelevant to a discussion of ENDER’S GAME. The simple fact is that neither the underlying book nor the film itself reflect these views in any way, shape or form. On the contrary, the film not only transports viewers to an entertaining and action-filled world, but it does so with positive and inspiring characters who ultimately deliver an ennobling and life-affirming message. Lionsgate will continue its longstanding commitment to the LGBT community by exploring new ways we can support LGBT causes and, as part of this ongoing process, will host a benefit premiere for ENDER’S GAME.

It’s certainly a very well-written, well-supported statement from Lionsgate but I suppose the question people will have to ponder now is – did it come too late? Should Lionsgate have come out against the author, whose work they optioned for a film, the moment they optioned it? Considering Hollywood deals, I don’t think that’s a realistic expectation but I do wonder why their public relations team didn’t have someone do an interview at least discussing the topic earlier. Perhaps they thought they would be the impetus for a boycott themselves if they did?

We can’t be sure at this point of course but what do you make of their statement? Are Card’s views “completely irrelevant to a discussion of Ender’s Game” the movie as they suggest? Is Lionsgate holding a benefit premiere enough to balance out Card’s financial profit (perhaps going to further NOM’s work) from the film?

[UPDATE] Geeks OUT have issued a response to Lionsgate’s statement:

As proud members of the LGBT community, champions of creative freedom and honest self-expression, and a group at whom the film Ender’s Game is directly marketed, we appreciate Lionsgate’s record of doing good things and its admirable, strongly worded rejection of Ender’s Game author Orson Scott Card’s and the National Organization for Marriage’s anti-gay activism.

The simple fact is that Skip Ender’s Game has never been about the content of the novel or the film Ender’s Game. It’s about money. It’s about the millions of dollars the company has already paid to Card and the potential millions he and the National Organization for Marriage stand to make off of the success of the film—our money.

A benefit premiere, indeed any outreach to the LGBT community by Lionsgate, ought to be much appreciated. What’s clear is that whether or not they support his views, Lionsgate is standing by their man and their would-be blockbuster. They made the common, perhaps cynical, calculation that audiences wouldn’t connect Ender’s Game with Card’s very public homophobia—or wouldn’t care. Geeks OUT appreciates that most American families work for every dollar and care deeply about where that money goes and what it supports.

Skip Ender’s Game is not a threat; it is a reality. Our pledge adds hundreds of signtatures every day from sci-fi fans around the world who would rather stay home than support homophobia. We have only just started and Geeks OUT and its allies are prepared to carry on past November 1. Nothing Card nor Lionsgate has said changes the fact that skipping Ender’s Game is the easiest way to ensure none of your dollars go to Orson Scott Card’s and the National Organization for Marriage’s extreme anti-gay agenda.