"In the eye of a hurricane, there is quiet/for just a moment/a yellow sky..." 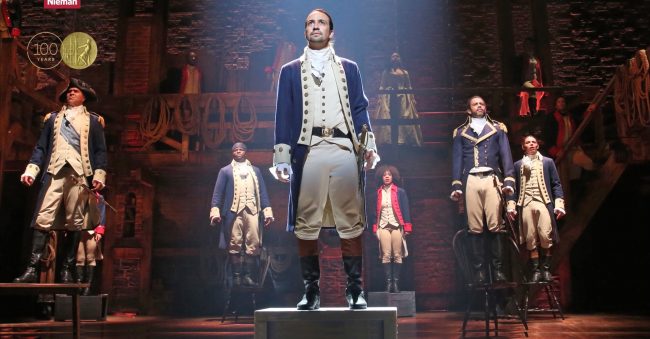 Of all the places Hamilton will play as it tours the world, few will be quite as meaningful as this. Lin-Manuel Miranda has announced that he will be returning to the title role and bringing a production to Puerto Rico.

As reported by Deadline Hollywood, Hamilton will be coming to the theater at the University of Puerto Rico in San Juan in January of 2019 with Miranda reprising his role as the show’s lead. The venue was damaged during Hurricane Maria, but will be repaired by the time the show is ready to open.

This will be the first time Miranda will be stepping back into the role since he left the Broadway production in 2016, and it’s been a plan of his since Hamilton’s very first performances at New York’s Public Theater back in 2015. Said Miranda in a statement:

“Bringing [Hamilton] to Puerto Rico is a dream that I’ve had since we first opened at The Public Theater in 2015. When I last visited the island, a few weeks before Hurricane Maria, I had made a commitment to not only bring the show to Puerto Rico, but also return again to the title role. In the aftermath of Maria we decided to expedite the announcement of the project to send a bold message that Puerto Rico will recover and be back in business, stronger than ever.”

Miranda has become a leader, not just in the hurricane relief efforts for Puerto Rico, but in advocating for the island in the wake of an economic crisis. He took to the stage on Last Week Tonight with John Oliver to plead with Congress to provide relief and a solid plan for handling Puerto Rico’s debt. He helped create a commemorative plaza in honor of his grandfather in Vega Alta, the town in Puerto Rico where Miranda’s family is from, to encourage tourism.

And of course, most recently, he brought together some of of the biggest Latinx powerhouses in music and entertainment on a song he wrote called “Almost Like Praying,” the proceeds of which benefit the Hispanic Federation’s Hurricane Maria relief effort. Billboard recently posted a video interview with Miranda where he explained “How It Went Down.” It’s fascinating, and absolutely bananas the lengths that over 20 people had to go to in order to get this song done in two weeks!

.@Lin_Manuel Miranda tells us #HowItWentDown with “Almost Like Praying” 🎶 pic.twitter.com/KWg5C0qIgf

It’s inspiring to me to see Miranda, a fellow Nuyorican in the arts who is my age devote so much of himself to this island our parents come from. It makes me want to do everything I can to help, too. I have yet to see Hamilton. Now, I think I’m going to wait until it arrives in Puerto Rico and see it for the first time in San Juan and spend All the Money locally while I’m there.

Hamilton arrives at at the University of Puerto Rico’s Teatro UPR January 8–27, 2019. And in the meantime, you can support the Hispanic Federation’s “Unidos” fund for Hurricane Maria relief HERE.