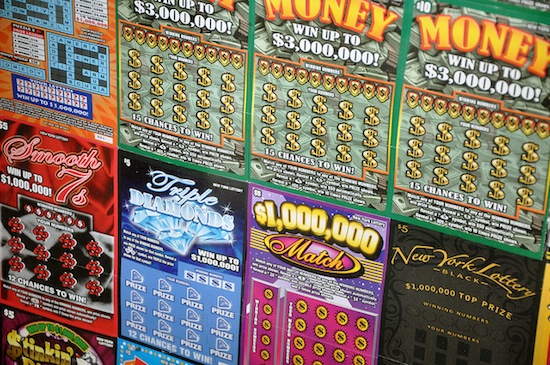 The lottery — or as you may know it, “taxes for people who don’t think they pay enough taxes yet” — is a fun game, and an only slightly less effective means of losing money than, say, setting it ablaze in a large pile or just flushing it directly down the toilet. It’s also easier on your ventilation and sewage systems than those options, which concludes our thorough summary of all of the virtues of playing the lottery. Oh, wait, there’s one more — lottery tickets make fun holiday gifts for children that you have forgotten to buy holiday gifts for, and only might doom them to a lifetime of shattered dreams, broken promises, and horses who just couldn’t quite keep it going down the stretch. According to a report issued today by the International Centre for Youth Gambling Problems and High-Risk Behaviors at McGill University, getting lottery tickets as holiday gifts can be a gateway into problem gambling for children. Even if it doesn’t, though, best case scenario, it’s teaching that kid to do a staggeringly stupid thing, as in play the lottery, so maybe don’t do that, just on principle.

On the other hand, lottery tickets are also simple, cheap, exciting gifts that make a great introduction to important life lessons like splitting eights, letting a winning bet on red ride, and knowing when to take the points on an underdog, so let’s keep things in perspective here. According to the report, many problem gamblers today started when they were very young — between just nine and ten years old. Keith Whyte, director of the National Council on Problem Gambling points out that:

In a recent study conducted at Yale University by NCPG Board member Dr. Marc Potenza and colleagues, youngsters who received instant lottery tickets as a gift tended to begin gambling earlier in life – a possible risk factor for more severe gambling disorders later.

Now, we’ll level with you here, because we imagine many of you are having the same reaction we did, which is that we find it pretty hard to believe that a couple of scratch tickets are going to make some sweet kid a deviant gambling addict. In fact, we would argue that lottery tickets can provide a valuable object lesson in the value of money. Give your kid a scratch ticket and watch their hearts soar as they wonder if they’ve won, already making plans for how to spend their winnings, like so many Powerball contestants were on Facebook a few weeks back, and then watch as they plummet back to harsh reality when they understand they haven’t won a thing. After that, take a dollar from them and put it in a nearby blender to demonstrate an equally intelligent thing that you can do with money.

Of course, object lesson parenting isn’t for everyone. Some of you aren’t needlessly cruel to your offspring, and we respect that, even if we don’t agree with it. In that case, it is still probably better to steer clear of the tickets altogether. Not because it’s going to turn your kid into a gambler, though. It’s more because the lottery is a phenomenally stupid waste of money, because your odds of winning are very low. Like really, really low. Like “The odds that you will end up dating a supermodel” low? Oh, no. Oh, my no — they are much lower than that. Much, much lower. They are hilariously low, as this convenient infographic demonstrates.

So instead of playing the lottery, maybe use that couple of bucks to take the kids out for ice cream, or buy them a book, or I don’t know, it’s your money, do what you want with it. Just don’t teach your kids to play the lottery with it. We say this not out of concern for your children, but because it is frankly embarrassing to us as a species that the lottery is still a thing.

In the interest of letting blind, unfounded fear make our point for us, though: Don’t buy lottery tickets for minors because you don’t want to raise your little angel to be one of the sad old men getting brutally heckled by a child reporter in this segment from sorely missed variety program Wonder Showzen.

Then again, maybe you just need a quick and easy gift for a niece, nephew, or friend’s newly arrived rugrat, in which case, hey, go wild with the scratch-offs. Between them, a couple Slim Jim’s and B-grade energy drink or two, every Qwik-E-Mart in the world is a veritable Hallmark Store just waiting for you to assemble the perfect gift basket for someone else’s child. The little poop machine isn’t your responsibility, and in any case, engendering irresponsible, asinine behavior and lifelong bad habits is pretty much exactly the sort of thing for which cool aunts and uncles are kept around. After all, you’ve gotta have something to keep them busy until they’re old enough to be slipped their first glass of wine at a family function. Good times!