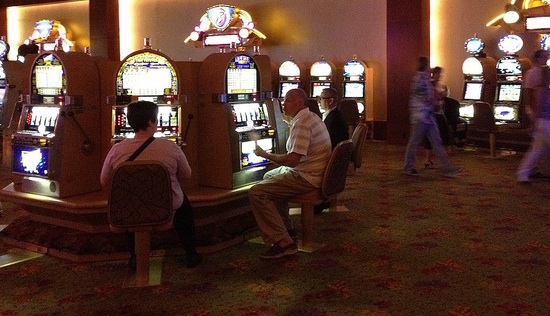 After years of grueling study, management at the Borgata Hotel Casino & Spa in Atlantic City reached the mind-boggling conclusion that gambling in their casino was not easy enough. Always on the lookout for the best interests of their patrons, the hotel has taken an unprecedented step to make it even easier for guests to fork over piles of cash by offering an amenity available nowhere else in the United States — gambling through the TV in your hotel room. Starting later this month, Borgata guests will be able to wager up to $2,500 a day on digital slots and video poker without even leaving the comfort of their beds.

The betting enabled TVs are, of course, also a shameless money grab by the Borgata, which should surprise no one who knows what a casino is. More than that, though, it’s the first of a whole series of increasingly shameless and undignified money grabs that casino management are already gnashing their teeth over. Borgata staff assured the AP that, while TV gambling is a groundbreaking technique for parting people from their paychecks, it’s merely a step down the road toward a brave new world where patrons can gamble using their phones or tablets anywhere on the casino grounds, and maybe even anywhere in the state. Tom Balance, president and chief operating officer of the Borgata, told the AP:

“This puts us in a position to leverage the technology into true mobile gaming and Internet betting later on. We’re moving forward with the future of gaming, and this is that first step.”

Internet gambling, of course, is itself just a step towards an even braver new world in which thousands of retirees simply endorse their Social Security checks over to the Borgata every month in exchange for long-term stays in specially designed Gamblo-Pods that provide shelter, sustenance, and occasionally flash or ring loudly to stimulate the rapidly deteriorating senses of their inhabitants. Truly, the future of gambling is a beautiful place.

The technology, which is already in use on those havens of decency and good decision making, cruise ships, will be installed in all of the Borgata’s 2,000 rooms beginning later this month. Unfortunately, with a February 18 rollout, visitors won’t be able to spend their Valentine’s Days placing bets from bed with the love of their life. You’ll just have to hold on to that dream for next year, Romeo.