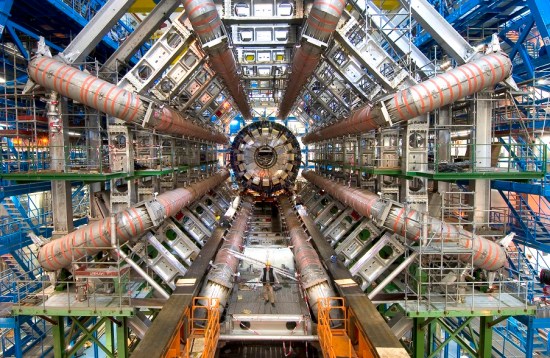 The Large Hadron Collider, one of the key tools being used in the search for the Higgs Boson, has found its first new particle since being put into operation back in 2009. No, it’s not the Higgs boson. The new particle is Chi_b (3P), a more excited state of the Chi particles we already knew existed. New kid on the block Chi_b (3P) should help researchers develop a more complete understanding of the strong nuclear force and to fill in the holes in the Standard Model in general; there are still a lot of holes in the Standard Model.

According to Professor Roger Jones, who works on the Atlas detector at the LHC, Chi_b (3P) is the product of a beauty quark and a beauty antiquark being bound together. The two are held together by the strong nuclear force, the same force that is responsible for holding atoms together. This excited state was thought to have existed for years now, but this is the first time that it’s ever actually been observed.

Of course, even the researchers involved are willing to admit that this isn’t the most exciting discovery, but that it forms the background for more exciting research. Jones put it this way:

“The better we understand the strong force, the more we understand a large part of the data that we see, which is quite often the background to the more exciting things we are looking for, like the Higgs. So, it’s helping put together that basic understanding that we have and need to do the new physics.”

And at least the LHC has been broken in now, and proved that not only can it avoid destroying the world and life as we know it, but it can also discover new particles. Hopefully this is just the confidence boost it needs to go on and find the Higgs so we can get on with this whole physics thing already.