Not so Fast, Neutrinos! Possible Explanation for CERN's Faster-Than-Light Claims 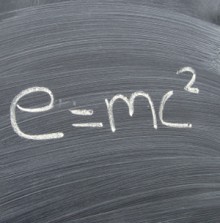 A few weeks ago, news broke that scientists at the CERN laboratory observed what could be particles traveling faster than the speed of light. With such physics-shaking implications on their hands, the researchers put out a call for independent verification. Though there have been a flurry of responses, one from the University of Groningen’s Ronald van Elburg could be the sweeping refutation that puts this issue to rest. Emphasis on “could be.”

In the original experiment, called OPERA, scientists measured how long it took for particles called neutrinos created at CERN to arrive at the Gran Sasso Laboratory in Italy.  The distance between the laboratories (roughly 454 miles), and the fact that Gran Sasso is located underneath quite a bit of mountain, complicated the experiment since synchronizing two clocks in different locations is extremely difficult. In order to account for this, the scientists relied on the time signal from an orbiting GPS satellite. Using this benchmark, the researchers found that the neutrino arrived 60 nanoseconds earlier than light would.

However, it’s this reliance on an orbital clock that van Elburg says is causing the results observed in the OPERA experiment. The way the OPERA scientists structured the experiment, they assumed that their GPS-syncronized clocks would function as if they were on the ground. However, those clocks are receiving a signal from an orbiting satellite, which is moving in reference to the Earth. This creates two frames of reference for the experiment, and not one, says van Elburg.

When it comes to relativity, frame of reference is everything. The satellite in this experiment was moving from West to East, tilted 55º in reference to the equator. Taken from this vantage point, the distance between the source of the neutrinos at CERN and the detector in Italy are actually changing. The excellent Physics arXiv blog at MIT’s Technology Review quotes van Elburg as saying, “From the perspective of the clock, the detector is moving towards the source and consequently the distance travelled by the particles as observed from the clock is shorter.”

Of course, science is all about peer review and further investigation. Like the CERN claims, van Elburg’s will need independent verification to stand up. At a glance, they are a bit troubling since his proposal is so simple and sweeping. However, they are particularly attractive since van Elburg is using special relativity to solve an apparent refutation of special relativity. Over at the comments section of arXiv, readers are already beginning to pick over van Elburg’s claims.

We’ll have to wait and see what the final consensus of the scientific community will be, but in the meantime we’re probably going to learn a lot more about the finer points of physics in the process.