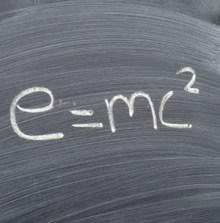 According to a report by the Associated Press, researchers at CERN have observed a subatomic particle moving faster than the speed of light. That’s right, faster than the speed of light. Like any sane people, these researchers are currently looking for outside sources to verify their results, and with results as mind-boggling as these, who could blame them.

It appears that the actual observation happened several months ago when a neutrino beam was shot 454 miles from the area around Geneva to Italy and arrived 60 nanoseconds earlier than light would. That’s not much over, but the margin of error was only 10 nanoseconds, which means this is a statistically significant discovery. After pouring over the results for months, CERN has now turned to the U.S. and Japan to double check their work. Although a 50 to 70 nanosecond gain over the course of 454 miles might not sound like much, it could actually change the understanding of physics as we know it, or at least as we’ve known in the past century.

It’s easy to jump off the rails thinking about the possibilities of faster-than-light travel, but everyone is keeping in mind that this might be an error of some sort. Even if it turns out to be completely true, not much happens, other than the theory of relativity as we know needing some reevaluation. It was only neutrinos, and only a 50 to 70 nanosecond gain, but still, it may turn out that the speed of light is an arbitrary limit, which opens up an incredible world of opportunities. After all, particles that move faster than light should be able to go forwards or backwards in time.