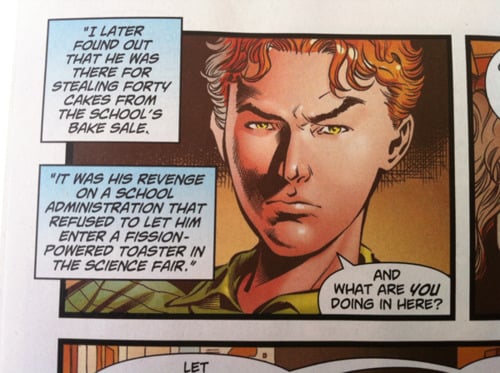 Superman #709 came out today, and according to Dean Trippe‘s tumblr, it contains this panel, canonizing the definition of “forty” from The Super Dictionary, which states:

When no one was looking, Lex Luthor

That’s as many as four tens.

If you aren’t familiar with Lex Luthor and his affection for cakes, allow us to enlighten you. 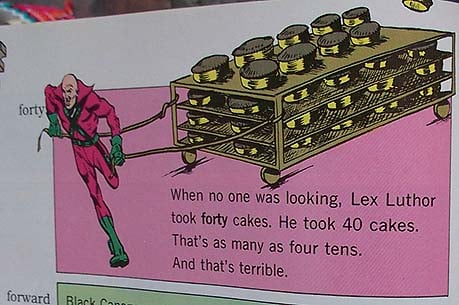 So yeah, The Super Dictionary was a child’s dictionary featuring various characters from the DC Universe explaining the meaning of various basic words. And then the internet discovered it. And they discovered how it defined forty.

For an added bit of context, Lex Luthor was a ginger before he went bald. Hence, the panel from this week’s Superman is happening during Lex’s high school years, where he likely didn’t dress in a fuchsia unitard with green accessories.

Although that might explain what prompted his later anti-social behavior.

Now I just have one question for myself. Is an internet joke made canon worth $3 at Forbidden Planet tonight?