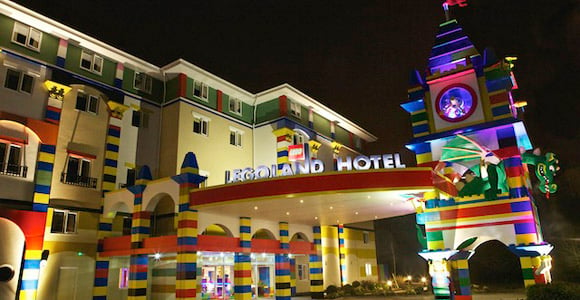 A hotel made out of LEGO bricks may not seem feasible (or comfortable for that matter) so you’ll be happy to know the new hotel at LEGOLAND in California is made mostly out of real bricks. Yes, mostly.

I’ve never been out to LEGOLAND but I’d imagine it’s pretty cool. The accompanying hotel will be opening up April 5, 2013. Here’s some details from Toy News International:

The three-story, 250-room Hotel immerses guests in the creative world of LEGO as it is designed to bring children’s imaginations to life. There are approximately 3,422 LEGO models in the entire Hotel created out of more than three million LEGO bricks. Model Builders have just installed the iconic LEGO® dragon model which will breathe smoke as guests enter. Construction crews are working rain or shine getting the hotel ready for its early opening and have crowned the clock tower at the entrance. A LEGO knight, pirate and adventurer have also been unveiled representing the three themed room choices. Guests can also choose between themed or premium themed rooms – premium themed rooms have additional LEGO models and décor such as themed wall paper.

As an added bonus, each room will have a separate living space for adults and kids with fun activities for all. There’s medieval themed rooms, pirate themed rooms, and I mentioned something about scorpions, didn’t I? Of course they aren’t real, there’s LEGO animals and plant life scattered around the rooms and hotel. Check out a picture or video tour on their website.

From what I can tell, there aren’t any of the LEGO licensed characters in the hotel; Harry Potter, Batman, etc. but even as an adult I’m dying to spend a night there. You?