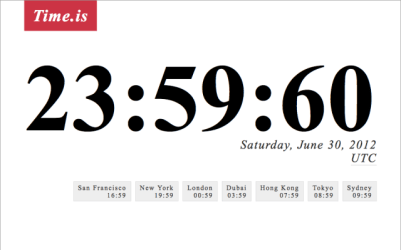 It’s not exactly enough to squeeze in more leisure time, but this Saturday, June 30th, will have a leap second added to it, ending the day at the strange time of 23:59:60. Thus, the last minute of the day will be 61 seconds long. Hit the jump to learn why!

A leap second is an adjustment to the atomic-clock based Coordinated Universal Time, the standard by which the world’s clocks operates, to bring it closer to Universal Time, the actual time it takes for the Earth to complete a rotation cycle. The Earth takes about 86,400 seconds to complete a 360 degree revolution. However, it wobbles along its axis and is impacted by the gravitational pull of the Sun, Moon, and ocean tides, all of which can lengthen its rotation by a second. This results in the Earth and our atomic clock losing coordination. This Saturday, scientists will essentially hold back time in order to correct the discord.

These adjustments began in 1972, before which the world’s time was entirely expressed in Greenwich Mean Time, which measured the time based upon the Sun’s position in relation to the Earth or stars. Now we use an atomic clocks, which allow us to measure “fluctuations in the atom of the chemical element caesium that allows them to divide a single second into 10 billion smaller bits.”

The addition of just one second to the world’s time is not without controversy. Every time the clock is changed, computers must be manually adjusted, a seemingly insignificant task that is actually very daunting and costly when you consider that it must be done to all of the world’s computers. Furthermore, “high-precision systems such as satellites and some data networks will have to factor in the leap second or risk provoking a calculation catastrophe.” For this reason, scientists have long advocated for the exclusive use of atomic time, which wouldn’t require any risky adjustments.

So, in honor of  leap second Saturday, here’s a list of things you can do with that extra time on your hands, provided satellites don’t come crashing from space and no one decides to faultily launch any rockets:

3. Listen to the first three notes of Moonlight Sonata, with its tempo of sixty quarter beats per minute.

5. Make the decision to have a late night snack.

How will you use your extra second?

(via Laughing Squid and The Telegraph.)