Laurie Spiegel: The Underground Music Artist Now In the Forefront, Thanks to The Hunger Games 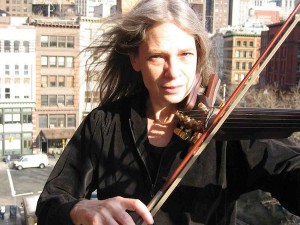 In The Hunger Games, when Katniss and her fellow competing tributes first emerge from the tubes that bring them above ground and into the arena, finally facing the life-or-death battle they’d been only previously been hearing about, dreading, then preparing for, a piece of music is playing that sets the perfect tone for this kind of overwhelming, visceral emotion in a futuristic world. It’s called “Sediment,” and it was not specifically made for this movie. It was first composed in 1972, by a woman who has, until now, remained pretty far under the radar. Laurie Spiegel, the composer of “Sediment,” has been a pioneer in experimental electronic music for decades, and hopefully writing about her now will make up for how we really hadn’t heard of her before very recently. We honestly can’t believe we’re just learning about her now, because what she has contributed to music is pretty amazing.

Spiegel, in short, is a true innovator, and not just when it comes to music. In addition to being a composer and musician, she has also developed computer programs, including the Music Mouse program for Macintosh computers. She was also an engineer at Bell Labs. However, after reading her interviews with Wired and Slate, Spiegel sounds more interesting in discussing her musical achievements — as well as pushing the hiring of more female composers (for film, orchestras, etc.).

Before “Sediment” made it into The Hunger Games, this piece could only be found on a compilation album that flat out stole Spiegel’s piece. It appears on the fourth volume of An Anthology of Noise & Electronic Music, which does credit Spiegel, who also left a review on its Amazon page. But the company responsible for the album, Sub Rosa Records, never paid her to use the piece, and she hasn’t seen a dime of the profits. Apparently, as Spiegel wrote in her review, the company producing the album never responded to her request for a licensing agreement. (Infuriating, right?) Rather than sue the company, the musician preferred to let it slide so people could still hear her music.

The process by which “Sediment” made it into The Hunger Games, however, was much more legit, as Slate confirmed. Spiegel says she isn’t getting a ton of money (more could come when the movie makes it onto television), but she seems pleased that her work is being featured in this particular movie with Katniss as its protagonist, whom she calls “an authentic person in a sea of artificiality,” who “takes responsibility and cares for other people.” But she’s also thrilled that her brand of music will be heard by a much wider audience than she’s accustomed, saying that her music had previously only been heard in “avant-garde, underground films.”

And boy howdy, are we grateful to hear it now. Here is the full, 9-minute “Sediment”:

While it’s credited as part of the score, it is not available on the official soundtrack. Spiegel says that she recorded it in her Manhattan apartment, and it greatly interfered with her appliances:

“It was a five-room apartment running on a single 15-amp fuse,” she said. “When the refrigerator went on, half the oscillators dropped by a quarter tone…. I had to turn the refrigerator off, or it would ruin the take.”

She mapped the piece out on graph paper beforehand and recorded it using an analog synthesizer and two stereo reel-to-reel decks. New school? Meet old school.

Finally, here is Spiegel in action: