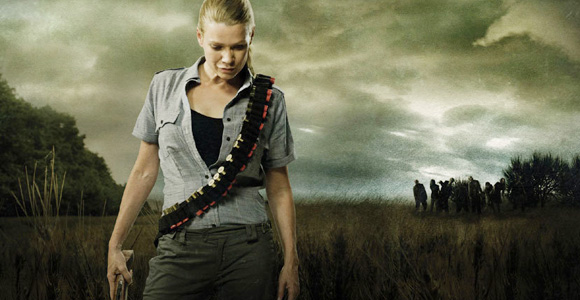 Fans of Robert Kirkman’s The Walking Dead comic know that Andrea is one of the best guns in zombie town. We’ve only just started to see that come through on the AMC television series (although Daryl is thankful she’s not quite there yet) but did you know, the actress who plays Andrea, Laurie Holden, is a surprise crack shot herself?

Holden recently did an interview with the cable network that employs her and mentioned she and Andrea have a few things in common, particularly their unique adaptation when it comes to firing guns. The actess said she used firearms a little during her time playing an agent on The Shield but that didn’t come close to the training she had to go through for The Walking Dead.

“I got hooked up with a shooting expert and we were going into the backwoods of Georgia on weekends for like two hours at a time. He would put bulls-eyes throughout the woods. They were tiny,” she said. “When I saw that, I was like, ‘Come on!’ He told me just to try it — and I started nailing all of them! He said he’d never seen anything like it. I guess I have a knack for shooting I didn’t realize I had.”

Quite similar to (spoilers for the latest episode) what we saw her go through in Sunday’s episode. She said of one particular scene where Andrea and Shane have to fight their way out of a neighborhood full of zombies, “I love the dynamics of the scene — we go from being upset about not finding Sophia to the zombies coming. Andrea freaks out and the gun misfires and then she really finds her own strength.” (End spoilers)

The actress also talked about how much she appreciates the growth her character has seen since last season. “I really love what they’ve done with my character. Last year was awful! All I did as Andrea was cry the whole summer,” she said. “She was such a sobbing, bereft, suicidal person and now she’s a warrior. I am a tomboy and I love being with the boys and shooting guns and stuff. There was more acting required to be, like, scared of zombies — it’s more natural for me on the show now.”

The Walking Dead will have its mid-season finale this Sunday on AMC.