L.A. Officially Names Intersection After Ray Bradbury Even Though He Didn’t Drive 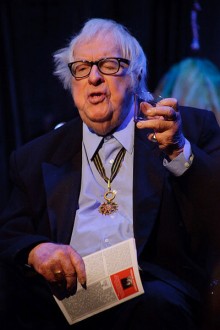 Ever since Ray Bradbury, science fiction guru and author of works like The Martian Chronicles, passed away back in June, folks have been tossing around the idea of renaming something in Los Angeles after the late writer. Recently, the idea came to rename an intersection after the man. Yesterday, the Los Angeles City Council voted to rename the downtown intersection at Fifth and Flower to Ray Bradbury Square. This is somewhat amusing, as Bradbury didn’t drive.

It’s not like he wasn’t known to the area, however. According to CBS Los Angeles, Bradbury regularly visited nearby Clifton’s Cafeteria and was connected with the Central Library. So, at least they renamed an interaction that was near to a couple places relevant to Bradbury. They could have just decided to dedicate one that had nothing to do with the author way out in the boonies, but that’s against the entire spirit of the action.

Even so, it really seems like they should have chosen a more apt structure given that Bradbury didn’t drive. An intersection is all well and good, but surely a park or library would have been better. Luckily, it looks like there might also be a library branch dedicated to the man as well, so we’ll take the intersection for now. The name of the branch would remain the same, but it’s something at least.

On the other hand, perhaps Bradbury would appreciate the delicious juxtaposition.