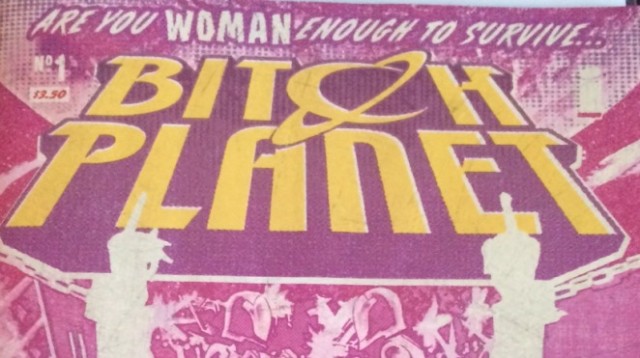 Last night, the Silver Snail Toronto hosted a launch party for Kelly Sue DeConnick’s new excellently-feminist comic, Bitch Planet, and The Mary Sue was in attendance to bring you all the very best details about the non-compliant.

The Snail was packed with fans waiting to meet DeConnick, artist Valentine de Landro, and letterer Clayton Cowles long before the event even started. Luckily, there were plenty of non-compliant cupcakes and specialty drinks to go around (including the “Blood of Thine Enemies,” and my personal favorite, the “Tears of Men”). You could also stop and get a bitchin’ non-compliant manicure, and enter the raffle to win prizes like original art from Chip Zdarsky and a gift basket stuffed with goodies (including a flogger! Someone is paying attention) from Come As You Are.

And while we all love some delicious male tears and manis, the best part about the Bitch Planet launch was that all proceeds from the event went to Nellie’s, a women’s shelter that also does advocacy and community support for women experiencing homelessness, violence, or poverty. Nellie’s Manager of Development Julia Robinson said their organization was excited to participate in the Bitch Planet launch because

The advocacy that we do [includes] social justice papers and position papers, and one of the things that we’re currently doing is women in criminalization. And so I know that that’s touched on in Bitch Planet. We’re feminist, anti-oppressive, and anti-racist, so it’s a really good fit, as Bitch Planet is also a comic book that is all of those things.

De Landro (who said The Mary Sue is a “fantastic site,” so, you’re alright, dude) was also incredibly proud to be working on the comic – though it hasn’t been an easy job. “This is a very challenging book,” he told us,

There’s a lot of different themes that we’re dealing with. Visually, sci-fi isn’t really my thing, I’m pushing myself out there that way, but I think it’s good to challenge yourself. This is keeping me motivated, it’s exciting and terrifying and all of those things all at once. It’s a really cool experience.”

DeConnick was thrilled with the turn out at the Snail, and told TMS (despite feeling tempted to just hide all day) that the response from fans has been “so encouraging and so kind.” As for the book itself,

It’s still a process of discovery every issue. I never end up writing the book I intend to write. I thought that Bitch Planet was going to be this really broad humor – I had gags planned. Seriously I was going to have all the women wear these Dr. Theopolis translation devices that would translate English to English – from regular English to compliant speech. Basically, it would just add a question mark and insert random apologies. And I still love that gag! But as I was writing the book, these characters started to feel real to me, and then suddenly gags were forced – and there’s nothing less funny than trying to be funny. So it kind of moved into something else.

And I’m not even sure what the book is anymore; it’s definitely us trying to do exploitation in a different way – exploitation with out being exploitative. We’re trying to figure out: is that something you can do?

Check out all our photos from the Bitch Planet launch right here, and make sure to pick up issue #1 online or at your local comic book store (and pre-order the rest)!