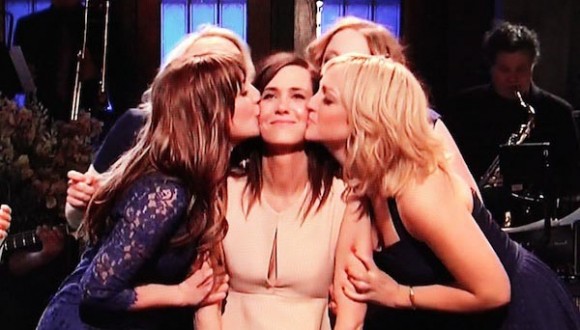 What’s been rumor for a while now has finally been confirmed — after seven seasons on NBC‘s Saturday Night Live, Kristen Wiig is moving on. Last year, the superstar comedian proved she could draw an audience beyond the late-night institution with her script for and performance in Bridesmaids, the former of which got her an Oscar nomination. So, yes — it will be sad to see Wiig’s brand of demented but lovable characters gone from Saturday nights. But she’s going to be just fine. That doesn’t mean that some of us, including Wiig, didn’t cry about it, though.

I have no idea if the Rolling Stones‘ “She’s a Rainbow” or “Ruby Tuesday” are among Kristen Wiig’s favorite songs, but having Mick Jagger himself and your castmates (and friends) for nearly a decade serenade you while bidding you farewell is probably one of the best ways to set the tone for the next step in one’s already amazing career.

Wiig closed out her tenure at SNL by giving some of her regular characters their official swan songs — Dooneese, the, uh, “different” sister on “The Lawrence Welk Show” and Mindy Gracin, Theater Actress on “Secret Word,” plus appearances throughout the show that clearly signaled that this was the last we were seeing of Wiig as a member of the cast. (Expect cameos and a hosting gig upon the release of her first post-SNL movie.) Her Bridesmaids co-star — and amazing SNL host and what I’m going to call “cameo artist” — Jon Hamm also showed up for the “Welk” cold open, plus Amy Poehler and Chris Kattan showed up in the goodnights. Steve Martin crashed “The Californians,” and I hope he never dresses like that ever again. It might have ruined my crush on him, as funny as he was. As a show, the season finale certainly had its high and low points outside of the impending farewell, but I’m not going to spend my time and energy dissecting the comedy when there were bigger things going on.

But speaking of those bigger things, there was no clear farewell for the other two reportedly departing cast members, Jason Sudeikis and Andy Samberg. Lorne Michaels has said that any announcements concerning cast changes will come later in the summer. However, Sudeikis looked pretty emotional when he hugged Wiig, and his movie career may be beckoning.

As for my imaginary TV boyfriend Samberg, I’m 95 percent sure this was his last show, too. Last week’s Digital Short celebrating the 100th Digital Short seemed like a pretty obvious wrap-up of Samberg’s career making videos for SNL, and let’s be honest about “Lazy Sunday 2” — that was an encore. Consider the line “This is how it began and that’s how Imma finish it.” Um, he basically said “that’s how Imma finish it.” In fact, he didn’t basically say it, he said it. And Seth Meyers gave him a pretty hearty hug in the goodnights, plus that was definitely a wave goodbye. Whether it was a goodbye to the season or to the show, well, we’ll find out when we find out.

Speaking of the goodnights, Wiig was visibly near tears the entire time and looked like she was going to just sob. She was not alone. And the final hug from Michaels was a pretty big deal. (I’m not gonna lie, guys, I’m getting choked up just thinking about it all.)

But it was proper to put Wiig in the spotlight for the farewell. She’s an amazing comedy performer with a serious knack for characters and improv, and the show hasn’t seen a character actor like her since Amy Poehler. Tina Fey was a sad goodbye, too, but she was leaving more as a writer than a performer. (The show’s first female head writer, at that.) Wiig turned herself into so many different people that the void being left will seem huge. The remaining women — Nasim Pedrad, Vanessa Bayer, Kate McKinnon, and Abby Elliott — are still really strong character actors, so it’s not as if we’re losing a strong presence with nothing standing by. Rather, Wiig’s spotlight will be distributed, and these girls will finally get the screen time they’ve been waiting for. And there could even be another woman added to the cast.

But Kristen Wiig will go down in SNL history among names like Gilda Radner, Dan Aykroyd, Will Ferrell, and Tina Fey. Maybe she wasn’t a master impressionist (expect Bill Hader to be compared to Darrell Hammond and Dana Carvey when he leaves), but she created characters out of people who already existed, and it was hilarious and it was smart. And her original characters were delightfully weird and grotesque, save a few duds (Gilly…). She was major. And we’ll see her again, but she’s the one to beat now, and she will be missed.

Until she starts taking over movies, which I think we’re all fine with if they’re as good as Bridesmaids.

So, godspeed to you, Kristen Wiig! We can’t wait to see what’s next! Here is video of Wiig’s goodbye:

I’m seriously in a glass case of emotion, you guys.