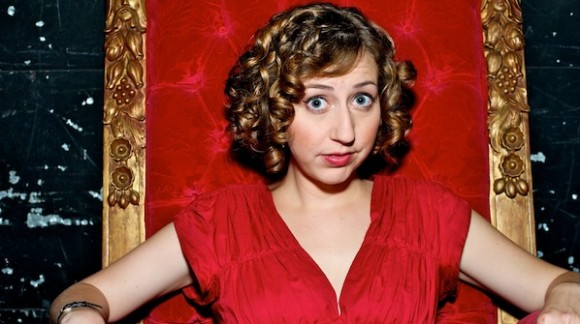 When you hear this news, you’ll immediately wonder why it hasn’t happened already: comedy darling Kristen Schaal has signed on for a recurring role on NBC‘s 30 Rock, and as an added bonus, any details about her role are being witheld from the public. This means we get to speculate on who Schaal will be playing, which character she’ll be interacting with, whether she is a villain or an ally, and the extent to which this will be super, super wonderful!

Producers are remaining tight-lipped on what kind of role Schaal has taken on, but Splitsider has a few ideas of their own that would be a blast:

As awesome as a love interest for Kenneth would be, out of these, I’d most like to see Schaal as some sort of passive-aggressive rival for Liz Lemon (Tina Fey), or at least someone who can challenge the unchallengeable Jack Donaghy (Alec Baldwin). But who else could the current Daily Show contributor/former Flight of the Conchords (who also voices Louise on Bob’s Burgers) star be?

Maybe she could be one of the bloggers from Joan of Snark. Or she could be a late-to-the-party Occupy Wall Street protester who gets Jenna (Jane Krakowski) involved and gets Jack’s feathers all ruffled.

Who knows! They’re not telling us. We’re just going to have to be unbelievably, pleasantly surprised when the episodes air.

(The Hollywood Reporter via Splitsider)