Everyone Be Good, Because KrampusFest Is Coming

Either that, or lean how to escape from a sack. 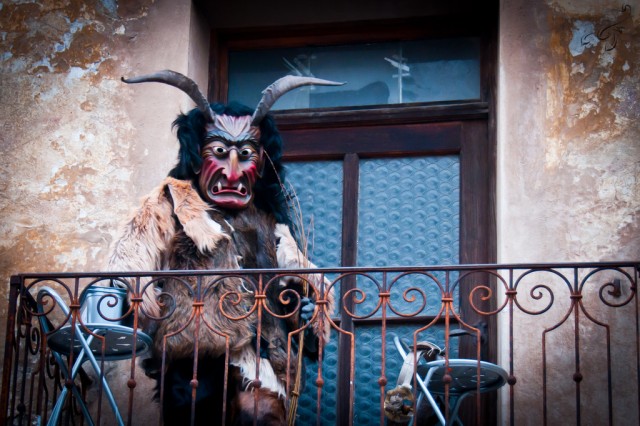 Every major city in the U.S. has a “Santacon” now, where folks dress up like Santa Claus and run around drinking and starting fights. In NYC, it’s basically the worst thing ever. So we’re pretty jealous of Los Angeles for scheduling its first ever “Krampusfest,” inspired by the mythological Christmas monster that terrorizes naughty children.

In case you’re not familiar with Krampus, let us educate you: he’s a folk legend with roots in Germanic tradition. According to most interpretations of the story, St. Nicholas would fly around giving presents to all the good children on December 5th every year. The bad children did not get coal, like they do in the pansy American version. Instead they get a visit by Krampus, who would terrorize them with rattling chains, beat them with switches, and on special occasions throw them into a sack (or a basket) and carry them off to his lair for further punishment. And the craziest part? People still dress up as him today in Austria, Slovenia, the Czech Republic, Croatia — and now Los Angeles.

Was that too informative a description for you? Then here, have a wacky video from European pop star/weirdo Actually Huizenga, who’ll be performing at the Krampus Ball this year:

Try not to get that stuck in your head for the rest of the month.

Of course, Krampusfest isn’t actually a response to Santacon. It’s instead a “multi-venue celebration” that will run this year from December 5th to the 21st. A troupe of costumed Krampus performers will appear at each venue, including the Krampus Ball, an art exhibition, and a publicly held run held in conjunction with the Downtown Art Walk. Each member of the Krampus Los Angeles Troupe makes their costume mostly by hand, too, which is very impressive.

Given that LA’s Santacon overlaps with the festival on December 14th, though, we’re really hoping that the Krampuses throw a bunch of drunk and unruly Santa imposters into a sack. Like, a whole bunch. Come on, guys. Do it for all of us who want to walk the streets without getting puked on by an elf this holiday season. Just scare the heck out of some Santa bros. Please.

(via Archie McPhee on Tumblr and Krampusfest, image via Michele Bighignoli)