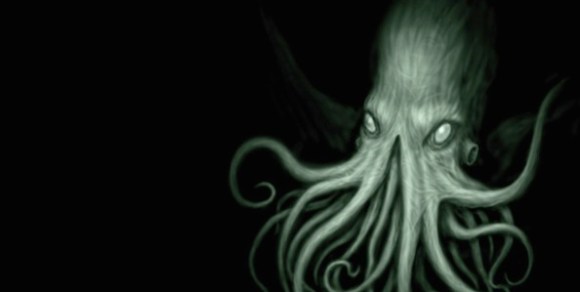 We’ll start off by saying just one thing: we’re pretty sure that kraken were not creating self-portraits in shallow water during the Triassic period. Because kraken aren’t actually real, and goodness knows if there were even mirrors around in prehistoric times for them to use as a reference tool. But some paleontologists are wondering exactly why a collection of icthyosaur (aka shonisaur) bones in Berlin-Ichthyosaur State Park in Nevada have been arranged the way they’ve found them. And their theory is that a 100-foot cephalopod may have salvaged the bones after killing the dinosaurs and used them to create self-portraits. Uhhhhh, okay!

This is from the actual abstract of the study, which is being presented to the Geological Society of America at its annual meeting:

We hypothesize that the shonisaurs were killed and carried to the site by an enormous Triassic cephalopod, a “kraken,” with estimated length of approximately 30 m, twice that of the modern Colossal Squid Mesonychoteuthis. In this scenario, shonisaurs were ambushed by a Triassic kraken, drowned, and dumped on a midden like that of a modern octopus. Where vertebrae in the assemblage are disarticulated, disks are arranged in curious linear patterns with almost geometric regularity … The proposed Triassic kraken, which could have been the most intelligent invertebrate ever, arranged the vertebral discs in biserial patterns, with individual pieces nesting in a fitted fashion as if they were part of a puzzle. The arranged vertebrae resemble the pattern of sucker discs on a cephalopod tentacle, with each amphicoelous vertebra strongly resembling a coleoid sucker. Thus the tessellated vertebral disc pavement may represent the earliest known self‑portrait.

This conclusion was reached by one Mark McMenamin of Holyhoke College, a paleontologist who acknowledges that the idea of a 100-foot Triassic-period octopus whose remains would not have been well-preserved, recreating its own image using the dead bodies of other dinosaurs that it drowned itself might be “met with skepticism.” But at least we can give him one thing: Ringo Starr was not kidding when he sang about an Octopus’ Garden, because octopi really do build gardens at the bottom of the sea to guard their lairs. So there is a very strong possibility that this is all that is: a very large, macabre octopus’ garden made of the bones of the ichthyosaurs that it murdered.

Maybe what Dr. McMenamin discovered is the scene of a crime! With a prehistoric serial killer police are now calling “The Killer Kraken”! The family of the victims could not be reached for comment.

Or, the octopus could have done it to impress a mate with its interior decorating skills, like bower birds, except instead of small blue objects it uses the mortal remains of massive long-necked Triassic marine predators.

But still, probably not a self-portrait. As fun as that would be to imagine.