Elderly Women on the Internet For Kraft | The Mary Sue 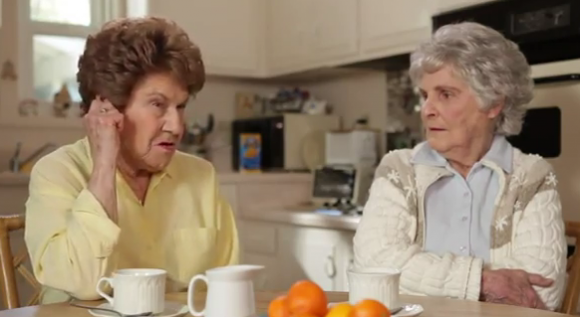 Meet Frankie and Dottie! They are the new spokespersons for KRAFT as they begin their campaign to spread the joy and goodness of their classic Mac & Cheese. And if you thought you were scared of your parents texting, wait until you hear this: KRAFT will be handing all of their social media — YouTube, Twitter, and Facebook — over to this macaroni-loving duo, who say they’ve been enjoying the very product they’re advertising for the past 75 years. See? This is what loyalty gets you.

And speaking of old woman taking over social media, Betty White has joined Twitter! Not an April Fool’s joke that was delayed because I couldn’t find my glasses.

First, Frankie and Dottie. The two women, both in their 80s, were chosen to put a different face on how senior citizens work with social media. Rather than being portrayed as adverse to technology and longing for the days when phones were attached the wall and we only had to dial five numbers, these women are happy to hop on the computer and interact with a really big audience of people. But it doesn’t necessarily mean they’ve become closely acquainted with stuff like Nyan Cat and the rage face. They’re still kind of finding their way around the internet, as evidenced in the first couple of videos they’ve posted to YouTube:

Honestly, I used to use “twitter” as a verb, too, and it always reminded me of hopping birds. (In other news, I am 87 years old.) Their tweets, always signed with whomever has written, are also signs that Frankie and Dottie are having a grand old time, but still getting used to hearing from a bunch of strangers on the computer. And again, honestly, it is kind of weird, isn’t it? One fun tweet: the one where they took their break for Wednesday morning table tennis. Some things simply cannot be rescheduled for the internet.

Here are a couple of their other videos:

On becoming “older than you used to be”:

Oh, this is such a great idea. Good job, Crispin Porter + Bogusky.

They are in good company: 90-year old Betty White has also joined Twitter, verified and everything, and currently has three tweets under her belt. The first one, the one about her new NBC show, Off Their Rockers, and the most recent one, where she flirts with Ryan Seacrest. I’m guessing one of the latter two reasons is the real reason she joined. Welcome, Betty!

(AdWeek via The Jane Dough, @BettyMWhite)