Have a Crush on Someone? There’s a Japanese Government Form for That

Ugh, I'll get to that later. I still need to register my broken heart. 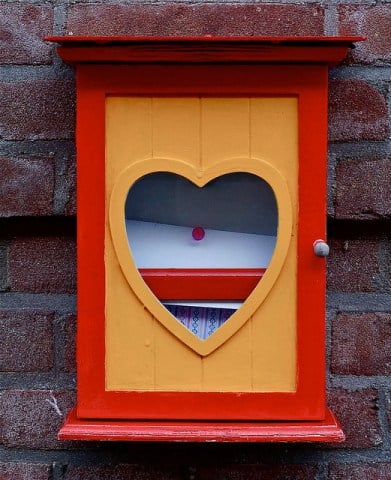 Romantics of the world, you better act fast. There’s just one month left to fill out your koitodoke—an official “love declaration” form designed by the Japanese town of Nagareyama in Chiba Prefecture to encourage baby-making.

If registering your romantic feelings with the government sounds more 1984 than Romeo and Juliet, don’t worry. Rocket News 24 reports that the bureaucratic initiative is just a (seemingly) tongue-in-cheek way of combating Japan’s declining birth rate. More than half the taxes in Nagareyama typically come from resident fees, so wing-manning the young and the virile is in the city’s best interest. Nagareyama has launched a full-fledged campaign to make the town appealing for young couples; in addition to instituting koitodokes, upcoming romantic movies Momose and Kochi wo Muite will be filmed in the city. 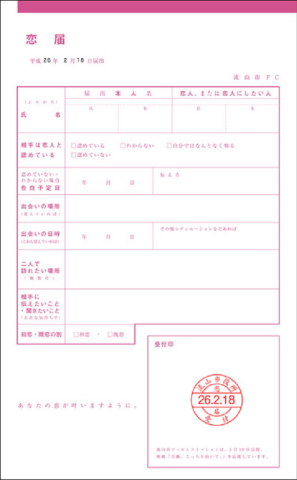 Town Spokesman Hideo Tsutsui told reporters that the forms give people a low-pressure way to express romantic feelings and as such will hopefully lead to more love, marriage, and babies in a baby carriage for the city. But the town might be putting an unrealistic amount of faith in the form’s abilities—especially since applicants don’t need any prior relationship with the recipient to fill one out.

The koitodoke begins by asking for the applicant’s name, the name of their sweetheart, and where and when the pair met. Meet-cute details can be left blank if you “don’t remember” (or don’t want your future grandkids to see “ex-boyfriend’s roommate, bar bathroom, murder trial“). The form then asks for places the couple might go together or things they would say, which is slightly unsettling considering that, again, the recipient might be a complete stranger to the applicant.

In fact, Nagareyama is so accepting of one-sided romantic declarations that the form even has boxes where you can predict if the subject will reciprocate your feelings. There’s “Yes,” “I’m not sure,” “I’m pretty sure,” and “No.”

Koitodokes also ask whether this is the applicant’s first love. As Rocket News points out, that’s a no-win box to tick. If you’re filling it out with your partner, then nothing kills the baby-making spark like the mention of exes, and if this isn’t your first time at the koitodoke rodeo and you’re completing it on your own… hopefully a government official can use your form to play matchmaker.

Even if you’re not in Nagareyama, you can still participate in the romantic government experiment here: simply fill out the form in any language then print it out for an authentically stamped declaration of feelings. I personally know a certain ham sandwich that’s going to be pretty surprised.