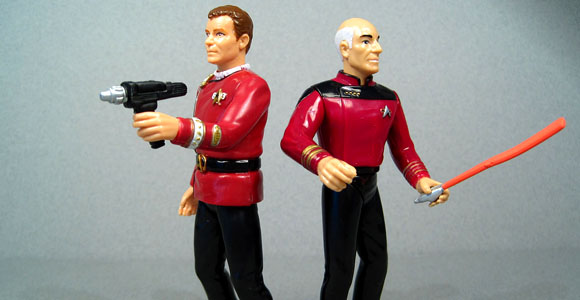 Captain Kirk and Captain Picard have shared screen-time before in the beloved Star Trek franchise but now they’ll travel to space together in real life. No, actors William Shatner and Sir Patrick Stewart won’t be boarding a space craft, their action figures will.

Using a high-altitude balloon, a group of Trekkers will launch not just James T. Kirk and Jean-Luc Picard into space (or near-space anyway) but several other Star Trek cast members in their action figure form.

“Picard and Kirk are the greatest starship captains ever to exist and they’ve never been to space in reality, so I think it’s about time we bring them there,” said Logan Kugler. The space enthusiast launched a Kickstarter campaign to make his dream come true.

“Kugler and his collaborators raised $6,193 through Kickstarter. They plan to use the money to loft six action figures, two starship models and five cameras to about 120,000 feet (37,000 meters) inside a balloon lifting off from Champaign, Ill,” writes Space.com. “The team is using a pure latex Kaymont balloon to make the roughly three-hour flight to the edge of space and back.”

Commander William Riker and Data will join Kirk and Picard for the ride but Kugler has also decided to include custom-made action figures of modern Star Trek lore,  J.J. Abrams and Roberto Orci.

“I’m a huge Star Trek fan, of course; I’ve seen almost 500 episodes, every movie,” Kugler told SPACE.com. “I personally believe at some point in the future the world we see in Star Trek is going to become a reality and every step closer we get to that is very interesting and fun. This is an insignificant step, it’s just fun, but it’s that symbolic representation.”

The flight was to take place this past Saturday but so far their adventures have not made it online.