Forget About Kinect Sutra: Microsoft Won’t Certify Adult Only Games for the Kinect 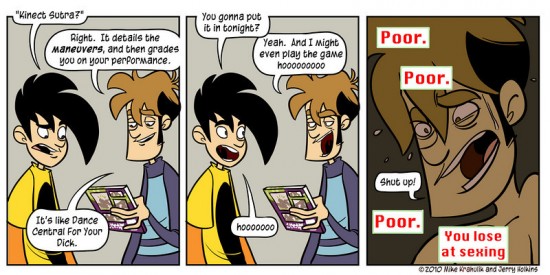 It was inevitable that some one would quite quickly approach the idea of merging the technological advances of the Kinect with humankind’s most evolutionary of pleasures, and the first of these to gain the notice of Microsoft has been sex-game maker ThriXXX (sweet Jebus this link is NSFW), who created a working demo for a game where you use Kinect controls to touch virtual boobs.

Microsoft got on that pretty quick.  From IGN:

“This isn’t the first example of a technology being used in ways not intended by its manufacturer, and it won’t be the last,” a spokesperson said in a statement. “Microsoft did not authorize or license its technology for this use.

“Xbox is a family friendly games and entertainment console and does not allow Adults Only (AO) content to be certified for use on its platform, and would not condone this type of game for Kinect.”

Certainly this statement is disappointing for many gamers, but can we please also consider the hopes of many gaming journalists dashed; the puns that will never be punned; the mainstream outrage that will never be ginned up disproportionate to its actual threat to Western Civilization?

A moment of silence, please.

(story via Kotaku, pic via, who else, Penny Arcade.)