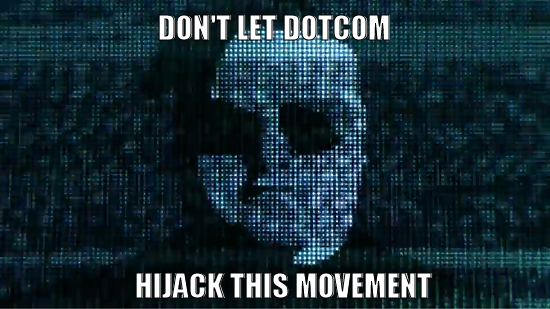 Before all the MegaUpload takedown garbage started, there was a MegaUpload song. It was a weird endorsement of the site, filled with crazy celebrity cameos. It was a goofy little PSA. If you haven’t seen it, you really should. Now, Kim Dotcom has dropped another single, and while similarly catchy, it’s a lot more serious in tone, serious to the point of being self-defeatingly pompous. The man has some valid points, but it’s just, well, see for yourself.

Doesn’t it kind of make you think “delusions of grandeur?” Sure, Dotcom makes some very good points here. Copyright maximalism is a huge problem, and it will only get worse if we don’t do anything about it, and while the direct reference to “Mr. President” seems a little over the top, the United States’ adoption of ACTA was an executive order.

All that aside, the video pretty much screams “propaganda!” unabashedly, at the top of its lungs. Go watch this off-base anti-piracy PSA and you’ll see this one isn’t that much less nakedly manipulative. Sure, all the footage of the ACTA protests is ostensibly related to the problems Kim Dotcom is having, but the footage of war, and of Martin Luther King Jr. — with whom Dotcom is trying to draw a direct personal comparison, it seems — is just a little bit overblown. And the shots of him with the beret and sunglasses? What is up with that? Anything the man has to say is completely undercut by his bald attempts to make this all about him. I mean, watch the first few seconds of that video again. What is that? Who is he supposed to be? Who does he think he’s being?

Copyright law is a huge deal right now, both because it’s already a big problem and it’s in danger of getting worse. The MegaUpload takedown was a symptom of that, but it’s not the first, nor the last, nor the worst result of problematic legislation. Don’t forget that the whole MegaUpload thing — whether its takedown was legal or not — was kind of shady, and Kim Dotcom has been known to be a crazy playboy and, dare I say, kind of a douche. And where was he before copyright law started to cramp his own personal style? Sure he is the victim, and he’s not about to let you forget that, but he’s not the only victim, and hell, he’s not even the most important victim, we all are. Dotcom’s just a dude on the right side who happens to have a whole lot of skin (read: cash) in the game.

So if you’re looking for someone to rally around, please keep looking. Don’t let Kim Dotcom hijack this movement. He may be in the right, but for the right reasons? Meanwhile, real heroes like the American Library Association have been fighting for you from the shadows for ages. Don’t let some dude with good PR make himself the figurehead of this movement with stock footage and a boatload of hyperbole. A fight worth fighting deserves a leader worth following; Kim Dotcom is just a clown.