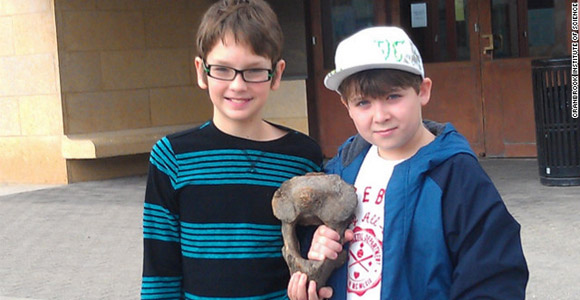 Some kids have all the luck.

Eleven-year-old cousins Eric Stamatin and Andrew Gainariu of Michigan went on a simple fishing trip and wound up making the news. Not because they caught a huge fish, but because they found a prehistoric bone.

“I thought it was a rock at first, but a couple minutes later I looked more at it, and I didn’t think it was a dinosaur bone, but I wasn’t sure,” Stamatin told CNN of the discovery.

Apparently nothing was biting that day (actually, they were trying to catch crayfish so snapping may be more appropriate) and they decided to play instead. That’s when they found the bone.

John Zawiskie, a geologist and paleontologist at the Cranbrook Institute of Science, was able to determine it was an axis, part of the second vertebrae of a mastodon, which has been extinct over 10,000 years. And little known fact (to me anyway),  the mastodon is Michigan’s state fossil.

“Every once in a while — by construction workers, or exploring 11-year-old boys and girls — something like this comes to the forefront and reminds us of the incredible history of Earth’s landscape,” said Zawiskie.

And what did the boys think?

“Oh my gosh, we were like psyched,” said Stamatin, who’s planning to make a presentation on the find in school. Gainariu actually bet his cousin $100 when Stamatin insisted it wasn’t a dinosaur bone. And in fact, it’s not, so no one has shelled out any cash. Though money is on their minds.

“Andrew said maybe we can sell it, and that we could be famous… but I guess we are famous already,” said Stamatin. “I have been thinking of selling it and making money off it,” said Gainariu, “but who is going to pay 2,000 bucks for a bone?”