Kevin Smith Wants a Shot At Directing Daredevil or The Defenders

The director helmed an episode of The Flash in its most recent season. 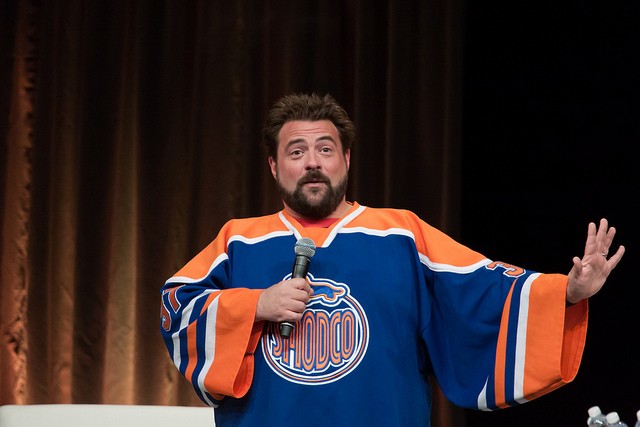 Apparently, now that Kevin Smith has had a taste of directing a superhero show he wants more! The writer and director, who recently directed an episode of The Flash towards the end of its second season and will be returning to direct another in season three, said he’s been in contact with Marvel CCO Joe Quesada to try and connect about potentially directing an episode of Daredevil or the upcoming Defenders series.

While promoting his new movie Yoga Hosers, Smith said it would be especially fun to work on Daredevil since he was involved with the comic at one point in time:

That’d be wild to be able to do it in real-life – let’s co-direct it, that’d be cool, just like we did the book. We could co-direct an episode and then, like, take the passion from the page to the screen.’ I’m going to try and make that Daredevil thing happen. Every time I talk to Quesada or Jeph Loeb, I’m like, ‘Hey! When are you going back down to the cameras?’

Smith also expressed interest in The Defenders, saying that it would be resemblant of a “mini-Avengers” but with less financial pressure than say, perhaps, one of the Avengers movies. And although the success of his career is mainly rooted in his beginnings as a film director, he went on to say that he actually prefers directing for television as a medium, because “somebody did all the heavy lifting for you, told this backstory, and added to the characters and stuff, so you’ve got this rich tapestry to play with for an hour where you don’t have to tell everybody and origin story, or tell everyone how this person feels about being this character.”

Personally, I really enjoyed Smith’s episode of The Flash–it’s only fitting that the man who shared a video of himself openly crying over the first season finale gave us an episode that conjured up the same amount of tears (for me, anyway). As a genuine comic book nerd, he has an excitement and an appreciation for these stories. I say give him more superhero show episodes!