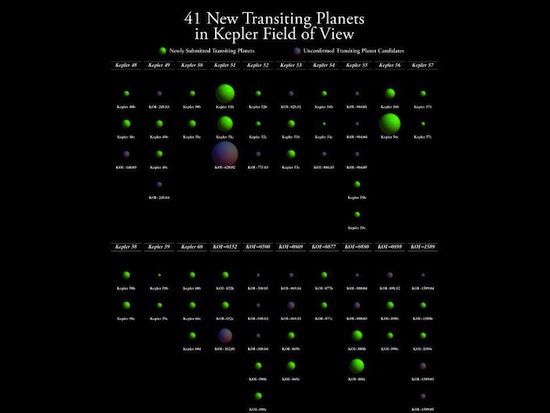 With Curiosity getting so much attention lately, it ‘s easy to forget that NASA has just oodles of other cool stuff going on right now. Yes, most of it does not involve skycrane drops or lasers or HD pictures of the surface of an alien world, but it is still cool, you guys! Case in point: NASA’s Kepler mission announced today that is has found 41 new exoplanets in 20 star systems. The results are preliminary and some are still being peer-reviewed to ensure that they are planets and not blips in the data or just alien civilizations messing with us. If they pan out, though — and there’s every reason to believe most of them will — it will raise the number of planets discovered by the Kepler mission by nearly 50%, to  a grand total of 116 planets.

Finding more planets helps researchers learn more about gravitation in solar systems and how planets come to be and find their homes around stars. That’s especially true when they find planets that share solar systems, which this batch of discoveries from Kepler has in spades. In turn, that information helps us better understand how our own solar system came to be.

The Kepler data is gathered by a space telescope with a wide field of vision and a very sensitive light-detector. This sensor measures dips in the brightness of far-off stars. When enough dips are correlated from a certain star and on a certain schedule, researchers can deduce that their is a planet orbiting the star, and occasionally blocking the light it sends our way. They can even make some educated inferences about the size and composition of the planet, and how far it is from the star it calls home.

Kepler is continuing to outperform researchers’ expectations, showing us that planets are more common than once thought in the universe. With that comes the heartening implication that somewhere out there, we are not alone. That thought is one of the few things that makes us sleep better at night.

Which reminds us: Before it’s out of date, this would be a good time to once again give props to Lane Harrison’s excellent, XKCD-inspired infographic taking a look at all of the known exoplanets.

(via ScienceDaily, image via NASA)